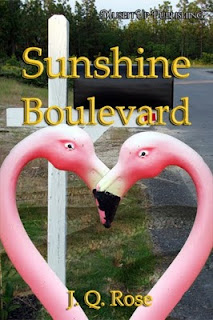 
All the excitement of the Book Fair and the Coffin Hopping Horror Tour this week. It's a fabulous week for readers and authors.


An old-fashioned Book Fair on this new-fangled technology is the perfect way to spend the day exploring the diverse genres, variety of writing styles, amazing authors.


The Coffin Hop is made for this frightening month of October. Horror lovers are giddy with anticipation for the next scary story leaving them trembling and hiding in a safe place. Enjoy these tours!


I am J.Q.Rose. Today I introduce you to Sunshine Boulevard, a mystery/light horror novella, e-book only. This is the perfect scary story for an October evening.


What a page turner and full of surprises! I couldn't put this book down.
Roseanne Dowell, author Stranger on the Shore
This story blends humor with mystery and death very cleverly, making it a book I had to keep reading. Even after I found out the answer to the question, I was still hooked and had to read on to find out what happened next.  Sue Perkins,  Sue’s Book Reviews, Feb 25, 2011 http://suebookreviews.blogspot.com/?zx=d335197e035d3ef3
MR Review
Rating: 4 stars
Reviewer: Amanda
Review:
Following the senior couple Gloria and Jim Hart, two snowbirds who migrate annually to Florida, Sunshine Boulevard is a page turning mystery. Instead of relaxing in their winter home of Citrus Ridge, Florida, playing golf endlessly and attending events at the community club, the couple becomes involved with a string of deaths and the gossip surrounding them. Jim, who is a First Call Responder volunteer, witnesses some of the mysterious deaths right after they occur, giving him the benefit of acquiring pieces to the puzzle before the public. Deaths in a senior community are not uncommon, per se, but Rose's writing foreshadows someone or something lurking just beneath Florida's rays of sunshine. Sunshine Boulevard is a gripping quick read and has encouraged me to be very wary when visiting the Sunshine State in the future!
AMAZON REVIEWS
4 stars Move Over Stephen King, May 13, 2011
By
Rochelle Weber (Volo, IL) - See all my reviews
(REAL NAME)
Amazon Verified Purchase(What's this?)
This review is from: Sunshine Boulevard (Kindle Edition)
J.Q. Rose's writing is as "bad" as Steven King's. When I read Salem's Lot, I couldn't put it down and I slept with a Bible, a Lutheran prayer book, and a Catholic prayer book for several weeks. I didn't pick up another of his books for twenty years

I read Sunshine Boulevard in bed and it's a miracle I did not have nightmares. If I were the naked lady in the geranium bush, I'd have been farther-gone--somewhere up North and still screaming. The fact that I read the whole book, however, is a testament to J.Q. Rose's writing. She had me from the first truly weird death to the ominous ending.
By
Ginger Simpson "mizging" (Tennessee) - See all my reviews
This review is from: Sunshine Boulevard (Kindle Edition)
Sunshine Boulevard runs through Citrus Ridge,FL, a place filled with senior citizens who come to enjoy the sunshine in the winter instead of cold and snow in their own home states. Affectionately known as "snowbirds," Jim and Gloria Hart are but one couple in this engaging read. Jim is a "first responder" to all emergencies within the community, and one of the first to witness the body of a deceased resident who bears a strange coloration and collapses into dust with a mere touch. When more deaths occur, the local police step up their investigations and bring in their dogs to help flush out the killers. OMG!

J.Q. Rose creates a suspense-filled story that keeps you reading to find out what is claiming the lives of people in Citrus Ridge. I won't give away any secrets, but I will reiterate my review title: I'm NOT moving to Florida...ever ever ever.
4 stars A Real Page Turner, April 4, 2011
Excerpt:
“Jim, Jim!” Gloria threw her keys on the kitchen counter and then stashed her mat and barbells in the hallway closet.


“Jim!” She called louder. He was not in the Florida room. She gingerly stepped from the kitchen to the carport. She darted into the attached shed housing the laundry room with storage in the front and Jim’s workshop in back. She walked through the workshop and out the door to the neat little back yard and found him watering their garden plot.
“Did you hear about George McDonnell?” Gloria shook her auburn hair, compliments of her favorite brand of hair color #118. Her clear blue eyes filled with tears.
“Yes, I heard.” Jim kinked the hose to stop the water flow and dragged it to the faucet on the back of the house. He slowly turned the tap to cut off the stream of water and dropped the hose to the freshly cut grass.
“How sad that he died alone. Oh, Jim, he wasn’t discovered for so long his body just ro...” She couldn’t say it.
“Gloria, come in the house. I have to tell you something. I don’t want the neighbors listening in on this conversation.” Gloria knew her husband of thirty-five years well enough to realize something wasn’t right.
As they stepped into the bright kitchen, Jim turned to her. Looking straight into her eyes, he said, “Royce called this morning. George’s death was peculiar. I guess, that’s what the Medical Examiner is saying.”
Jim was friends with the county M.E., Royce Williams. They worked together on investigations involving the First Responders Unit. Living in a retirement community, the Medical Examiner and medics were frequent visitors. An ambulance at a home was not a significant event at Citrus Ridge. It was part of life and death.
“Royce told us George’s body did not rot. It couldn’t have decomposed that quickly because Miss Lottie checked on him every day when she brought him the mail in the afternoon. She delivered it the day before he died. He was alert and talked about the weather.
“When Lottie called 9-1-1 at one o’clock yesterday, she was so upset she couldn’t even speak. They traced the call to her house. When the police arrived, she only pointed to George’s house.”
Jim stopped a minute. Gloria saw the anguish in his face. “They discovered George sitting in the living room in his recliner. His body was mustard yellow. His clothes were melted to his body. The odor was not a rotting smell, but rather like burning or scorching. In fact the fabric in the chair was charred. Ron was the first responder. He told me when he and the paramedics touched the body, it turned to powder.”
Gloria cried out in disbelief. She covered her face with her hands. “Dear God. What happened, Jim? What could have caused such a thing?”
“Ron arrived at the scene first. You know Ron. Always talking and telling greatstories.” Gloria remembered the usually fun-loving raucous Ron.
“Royce told me there was such a look of horror in Ron’s eyes. He was traumatized by what he saw. Ron told him he moved George’s wrist, and his hand fell making a pile of yellow ashes on the floor.”
“Dear God.” Gloria sat down at the dining room table feeling nauseous.     Jim wiped his eyes. “I don’t know how Ron and Lottie will ever forget this nightmare.”
The e-book is available at Muse It Up Publishing Bookstore

OK, you're telling me, that book with the pink flamingos making a heart shape is a horror story? That is just awesome. I'm going to have to check this story out now.
http://plbjourney.blogspot.com/2011/10/internet-book-fair-blogfest.html

Intriguing and great reviews. Wishing you all the best.

I enjoyed featuring this book at my blog this month.

Thanks all for stopping in today. Yes, Patricia, it truly is a horror story with a twist of humor. And the main characters' names are Jim and Gloria Hart...my cover artist decided the heart-shape flamingoes would be an inside joke for those who read the book.

What can turn a person into a pile of yellow ashes? Yikes! Gloria and Jim sound awesome. I feel sorry for Ron and I don't even know him! Great writing. I'll have to add this to my 'to-read' list. :)