Today it is my pleasure to welcome Scott Caseley to the J.Q. Rose blog. Scott is sharing a letter written by one of his characters in his newly released Young Adult – Coming of Age Mystery, Romance novel, Isosceles. 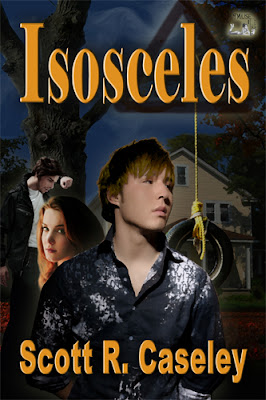 Madeline Edwards is a principal character in the book. As a high school student who lives in the town of Noone, Madeline is applying for entrance into Monadnock University.

Noone is more than a community of people; it’s more like—family. I was born here just under eighteen years ago in Lariviere Hospital. My parents brought me home, to the house that’s been in our family for generations. And, this is the kind of town where everyone it seems has roots here going back to the founding in the 1740’s. There’s a genuine sweetness to everyone you meet.  People are always saying “Hi” when they pass you on our main street, Zoe Avenue, or any other neighborhood in town.

I really like being a student at Oakes High School. Those people who say that high school is the best years of their lives are absolutely right. I have made lots of friends having been in the town of Noone my whole life. It’s nice too, I think, the familiarity of the faces. Because everyone has known each other since the first grade, we all get along. Maybe I’m naïve, but I don’t find there to be any real cliques in the halls of Oakes.
Okay, my life hasn’t all been that easy, my mom passed away when I was nine.  After that happened, my dad became a super-dad of sorts. He worked real hard, and was very devoted to me. When the bottom fell out of the economy a few years back, he lost his full-time engineering position at a tech company downtown. He didn’t stay out of work long though. Six months later, he took the first job that came up, a clerk position in a hardware store across the Plausawa River in Carver. While the money hasn’t always been great, and he’s had to work of overtime, he still managed to have an active role in my life. He’s taught me a lot about having a strong work ethic and how to be an exceptional parent one day. He’s my hero.

In closing, I hope that you will take into consideration, not just my GPA from my work inside the classroom, but the lessons I have learned in my town and inside my home.  I find that to be a clinical psychologist, learning about, and from people is the best set of lessons and tests that one can take. I look forward to joining the community at Monadnock University, and learning from a new set of faces and minds.

Thank you for your consideration.

When he finds his best friend Trey Goodsby dead and almost completely
submerged in a bathtub filled with bloody water, Sean McIntyre is determined to find
out if it was an accident or suicide. If it was suicide, why did he do it? And, did his
death accidental or intentional have anything to do with Madeline Edwards, the woman
who came between them constantly through their thirteen-year friendship? Isosceles, a
coming-of-age mystery romance begins with the death of Trey Goodsby, and explores his
relationships with family, friends, his romances, and which of the circumstances he found
himself in that led to the tragic event, and the repercussions for those he left behind.

“Go over to the play area. I’ll deal with you once I’m done
with…ah…whatever his name is.” Carter nodded to where the rest of the kids kneeled,
stood, or sat on a blue carpet, watching a boy building with wooden toy blocks. Right
away, I could sense he intended on crafting something difficult, a scale model of the
courthouse down the road from Footbridge. While the boy’s physical appearance seemed
rather ordinary, his skills could not be beat. He hadn’t misused a single block. Without
any hesitation or second-guessing himself, he knew what to do to put everything in the
right place.

“That’s so cool, Trey,” I heard a soft voice like the melodious whisper of birdsong, my
intuition revealing the identity before my eyes did. Madeline swayed from side to side,
beaming with her pearly-whites.

Trey paid her no mind though, allowing himself to be distracted only by his overgrown
dirty-blonde hair, which kept going in his face. Sometimes, he didn’t even push it away.
His focus so intense, a few times, he almost knocked into other kids. He never apologized
for it, nor did most get upset. They seemed to understand he was in a zone, one with his
creation. He circled the perimeter to detect if it needed something. Whenever he snapped
his fingers, he’d call out “cylinder,” “triangle,” or “rectangle.” Madeline would select it
out of a decaying cardboard box, to present it to him like an obedient puppy bringing a
tennis ball to its owner.

Mr. Carter, with Sheldon behind him, returned from their business in the hallway.
They joined the rest of us, studying Trey’s handiwork. Before long, Mr. Carter became
entranced, too. It felt frustrating. Being an only child, I was used to being the center of
my parents’ universe. Here, someone else stole the attention so rightfully mine. Worst
of all, watching Madeline fawn over him drove me crazy. His hair was messy, his shirt
dirty, and he was just average. Why did he hold her interest? Shouldn’t she see me
instead? Mom knitted me this nice sweater and combed my hair before I went to the bus
stop. My head started pounding from over-thinking the situation when Madeline moved
toward him, letting her pigtail accidentally brush against his head. He didn’t seem to
notice, but I sure did. I needed to take action.

Creeping over to the box of blocks less than five feet from the audience, I reached in
blindly selecting a triangle-shaped one with green crayon on the side facing up. With
everyone so enamoured by the courthouse, they didn’t even notice my hands trembling at
my side with rage. Giving one last furtive glance to Trey, Madeline, Mr. Carter, and then
ending on my classmates, I felt ready to execute the plan.

Many of the other kids started to pick up on my actions, giving me a brief moment of
satisfaction. Their jaws dropped as they watched the projectile block following a jagged
path through their makeshift circle. Of course, motor coordination issues since birth and
anger clouded my vision. Translation: my aim was inaccurate.

The block went careening through the air, never even coming close to its intended target.
Trey knew no fear, however. He must’ve sensed my imprecise aim the moment it left
my unsteady hand. Without raising an eyebrow, let alone diverting his eyes from his
structure, his arm swatted the wooden toy away like a fly. It changed course to come
crashing down onto the bridge of my Madeline’s button nose. I’m not sure what started to
pour first, the blood from her nostrils or the tears from her green eyes.

The bloodstained triangle ricocheted off her face to the courthouse, knocking it down
like dominoes. At the same time, Madeline wailed in pain. Trey’s eyes cast down at his
destroyed masterpiece, over to her, and finally to the crowd of spectators, with a cold,
soulless expression. He breathed heavily out of his nose, needing to know who ruined his
work. Sheldon, along with two other snitches, fingered me for the crime.

Scott R. Caseley was born in Nashua, New Hampshire. He gained an interest in writing in elementary school in nearby Hudson. Growing up, he carried a small notebook or pen on family trips making observations and frequently turned them into poems or short stories. While attending Franklin Pierce University, he co-wrote and co-directed a student film. After graduating, he wrote and directed a dramatic feature, co-wrote and directed a documentary and conducted interviews for an online magazine. He's also passionate about acting, and he's enjoyed performing on stage, in bit parts on film, and is also a trained voice actor. In addition to his creative pursuits, he is passionate about healthy living. He follows a fitness regimen consisting of several activities such as; weight training, walking, swimming, yoga, and hula hooping. He complements this by cooking several nutritious examples of international and American cuisine. Last, but certainly not least he also enjoys just spending time with family and friends until the early morning hours with plenty of laughter and coffee.