Please welcome Sarah-Jane Lehoux to the J.Q. Rose blog. Sarah-Jane has been hopping around cyberspace on her blog tour for the Sevy Series. Check her website for the schedule.

Find out more about the books in the Sevy Series following her article.

Leave a comment to win the entire Sevy Series!!

One of my biggest pet peeves in books, tv, and movies is when the writers obviously know little about human psychology. Say, for instance, a character dies. Happens quite a lot, wouldn’t you agree? But what some stories fail to properly follow up on is the aftermath of that death. Next chapter, next episode, and said dead character is barely mentioned, let alone mourned. The whole story suffers as readers/viewers need to be emotionally invested, and why should they be when the characters themselves aren’t?

I believe it’s a writer’s duty to educate themselves in human psychology—or more generally, what makes people do what they do, act how they act, be who they are. At a very basic level, writers should familiarize themselves with MASLOW’S HIERARCHY OF NEEDS. Wiki it, if you’ve never heard of it. Basically, it ranks various needs, from things like food and shelter, to safety and self-esteem. And it also explains the consequences of having one or more of these needs denied, taken away, or left unfulfilled.

So say a character’s parents are killed. This is a HUGE event! It shouldn’t be glossed over. Even if the character isn’t consciously aware of it, this traumatic event should impact almost every facet of their lives.
Sevy, the main character in The Sevy Series (obviously!) has dealt with a lot of loss in her life. While I was creating her, I did a lot of research into Post Traumatic Stress Disorder and depression. These conditions have symptoms that I weaved into her behavior, both when she is alone and when she is interacting with other characters. And while reader reaction to her has been mixed (from loving her to hating her), one thing is for sure: she is memorable. She lingers in the reader’s mind long after they put down the book.


And isn’t that the whole point of story-telling? 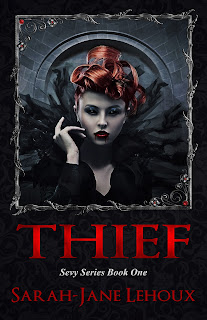 Blurb for Thief:
Happily Ever After Doesn't Come Without a Price
In the crumbling city of Eloria, there are two indisputable facts. First, everyone has a dream. Secret, seemingly unattainable, altogether irresistible, it is the kind of dream that aches and, at times, burns. For most, it will forever remain a teasing enigma, but there are those for whom dreams grow into obsession. Which brings us to the second indisputable fact: everyone has a price. Protestations of morality have little meaning when confronted with the all-consuming passion of the soul. Better judgment is pushed aside for the chance to obtain the unobtainable. The only question remaining is just how much a person is willing to sacrifice in order to get what they want.

Sevy has always been a quick study in the wicked ways of Eloria. Since childhood, she has eked out a living for herself with the help of her sticky fingers and her indomitable spirit. She has no qualms about taking what she desires, and when the unrequited love of her life is mysteriously murdered, Sevy will stop at nothing to get him back. Elvish black magic, necromancy and demonic pacts are of little consequence if it means she can once again have her beloved at her side. But is she willing to murder her only friend to get the job done? Is there a line that even this selfish, self-proclaimed bitch is not prepared to cross? 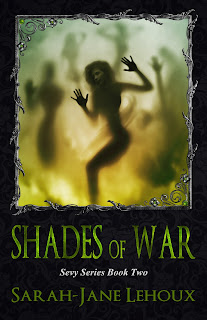 Blurb for Shades of War:
There is More Than One Road to Redemption
Sometimes the past can't be forgotten. Sometimes the truth refuses to be buried. And sometimes the dead won't stay dead.
It began as a simple request: Journey to the Northern Jungles and bring a wayward son back to the safety of his farm and family before the racial tension that is building between humans and dark elves erupts into civil war. But life is never simple for Sevy, and she soon finds herself entangled in a bloody battle of good versus evil, love versus hate.
Old friends and enemies reunite, familial bonds are broken, and loyalty is tested. And in the midst of the steamy, sultry jungles, the ghosts of a serial killer's victims come out to play. Sevy, as petulant and irascible as ever, must overcome her personal demons in order to expose a madman and bring peace back to the kingdom. But just how much of her sanity must she sacrifice to help her friends? And how can she save anyone when she can't even save her own soul? 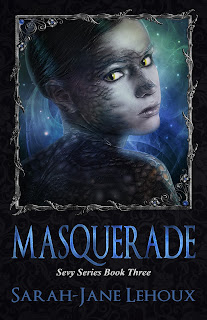 Blurb for Masquerade:
Never Trust a Liar, especially when they're telling the truth.
Starting over isn’t easy, especially when the world isn’t ready for you to change. Sevy, thief turned assassin turned mercenary, isn’t having any fun adjusting to a normal, law-abiding life. Luckily for her, an old partner in crime arrives with an irresistible proposition: a getaway to a tropical island, an adventure of a lifetime, and an amazing friendship ready to blossom into an even more amazing romance.
Things are looking up for Sevy. That is, until a pack of maniacal fairies with a taste for human flesh arrive on the scene.
Now she must unravel a web of magical intrigue hidden behind the outwardly idyllic atmosphere of the islands of Belakarta. Nothing is as it seems, and no one can be trusted. Trapped under the spell of a handsome and mysterious stranger, Sevy must fight fairies and tricksters to regain her freedom.
Or spend an eternity as a sorcerer’s plaything.

Author Bio:
Sarah-Jane Lehoux has always had a passion for storytelling. From grade school tales of cannibalistic ghosts, to teenaged conversations with God, to her rebellion against adulthood with fantasy kingdoms and fairy magic, she has attempted to share her love of the quirky and unconventional with her readers.
She currently resides in Southern Ontario with her husband and her horde of Machiavellian cats. In addition to her own writing, Sarah-Jane works as an editor and freelance cover artist.

Welcome, Sarah Jane. I see the connection between psychology and writing. You need to understand your character in order to develop that personality, like what makes him tick.

I think this is a good point. Too often we writers get caught up researching everything under the sun, but we assume we know our characters because we're human too. A little psychology could go a long way to a multilayered character.