Big Yee-haw welcome to Author Viola Ryan. My eyes were bedazzled when Viola sent her photos of the paintings she is sharing with us today, as well as two paintings her daughters created. There's a lot of talent in that family! Viola explains how she became interested in painting. If you're a writer, I think you'll completely understand her reasoning.

Thanks for having me again, JQ. I love getting a chance to chat with new people.

I used to write Buffy the Vampire Slayer fan fiction. That’s how I learned to write and how I realized I was a writer. One of the cardinal sins in fan fiction, the one people will blast you most for isn’t grammar mistakes. It’s creating what is known as a Mary Sue. That is basically the author inserting herself into the story. It warps the story because the canon characters around her often act out of character in order to elevate the Mary Sue. The author can’t let anything bad happen to the Mary Sue and conflict is key to any story. 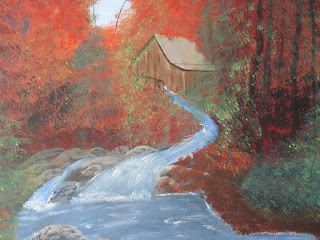 When I started writing The Mark of Abel, I wanted to avoid this, so I made my character an artist. I can’t draw a straight line with a ruler, so I figured she was different from me and I wouldn’t turn her into a Mary Sue. I love art, so I could handle her talking about art. Then came the scenes where she actually painted. Painting is a key plot point in the book. I needed to learn how to describe the act of painting. 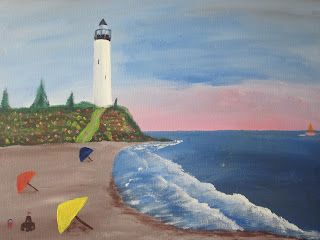 I decided I needed to take a painting class. It didn’t matter if I was horrible at it. I just needed to learn the language, so I could write the scene. I found a class on acrylic landscape painting. The class was a lot of fun. All I needed to do was bring a blank canvas. The instructor provided the rest and walked us step-by-step through each painting.

Not only did I love it, but I was pretty good at it. I have an eye for color and there are few straight lines in nature. My favorite part was mixing the colors on the canvas to paint the sky. I took the class for over a year before I attempted doing a painting outside of class. I had learned various techniques and applied them to my own original creation. 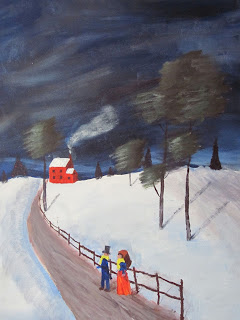 My husband is in the Coast Guard and we travel around a lot. Finding a friend I feel truly close to is difficult. When we lived in Delaware, I found such a remarkable woman. I call her Super Mom. She had previously only lived in California and Texas. She’d never seen a real fall before and the colors amazed her. Her husband is in the Air Force and I wanted her to be able to take fall wherever she went. That painting was the first one I did outside of class. Unfortunately, I forgot to take a picture of it before I gave it to her. 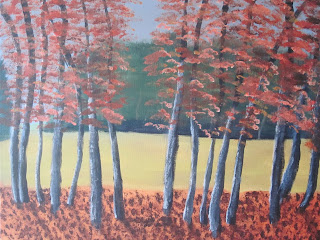 My daughters have inherited my love of art. I took my oldest daughter (at age 13) to the painting class with me. I taught my youngest the way I learned, by going step by step. Their paintings proudly hang in their rooms. 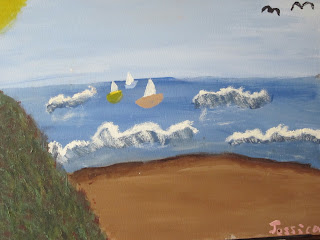 When I finally wrote the scene, people ask me how long I’ve been painting. Recently I made another friend a New England fall scene to take with her to Washington State.

You can find all of my other paintings at http://www.violaryan.com/my-paintings.html

If you want to read the scenes I wrote thanks to my hobby, check out The Mark of Abel. 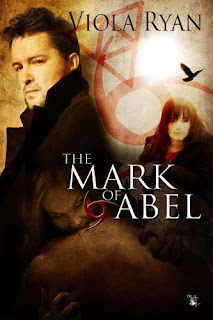 Is a frustrated artist Lucifer’s ticket back to heaven or will falling for her reawaken the compassion that got him expelled? 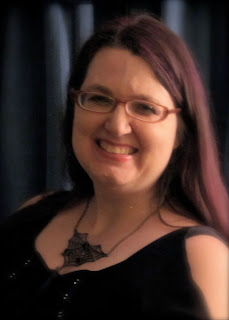