Holler a loud YEE-HAW for British author, Anne Stenhouse. She is fessing up to her foray into belly dancing today. Curious? Read on!

Before I get deeper into the mire, I should 'fess up.
I'm not a belly-dancer, but given different circumstances, I might have been. I am a writer, that's why JQ invited me on here, and I know the benefit of a good title.
The belly-dancing I have done was a lesson. I was at a charity ball and one of the other ladies on the table decided we would group our resources and bid in a silent auction for a belly-dancing lesson. We didn't win, but the donor was so impressed by my friend's enthusiasm she took us on too.
Like all the other dancing I've tried - Scottish Country, Highland, Ballroom, Line, Latin American, Ceildh, the Twist, Disco - it was good fun. It's always interesting if you are a regular dancer as I am, to learn the basic step behind the dramatic performance.
I might not have been able to shake the beautiful belt of jangling discs like an Eastern beauty, but I could lead with my left foot and take the group gracefully round the floor until handing it over to the next lady. It was a great experience.
I'm not signing up for anybody's harem anytime soon!
The picture of me turning under my friend's arm was taken during the dance following my marriage. We're probably dancing a Scottish dance called The Pride of Erin Waltz. It was and remains one of my favourite dances. 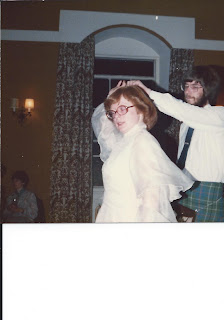 About Anne:
ANNE STENHOUSE has always loved words. Reading them and using them greedily, she can’t truly remember a time when she couldn’t escape into the pages of a book and certainly can’t remember when she couldn’t talk and ask

questions. Anne is a published and performed playwright. She studied both English and History at University in Edinburgh, and finds it a great joy to combine these two disciplines in her novels. Being a playwright means Anne loves dialogue and knows a piece is going well when she ‘begins to hear the characters talking to each other’. She has been a civil servant, full-time Mum, and for a while, a worker in an Addictions’ rehabilitation unit. Anne lives in Scotland with her husband and dancing partner of over thirty years. Their children and a grandchild are close by.

Synopsis:
Leaving the chapel in London’s 19th century Thames’ side where she teaches the alphabet to a raggle-taggle of urchins, Mariah Fox is charged by a stray pig. The quick intervention of Tobias Longreach saves her from certain injury. Mariah has always believed her destiny to be teaching. After the early death of her mother, she was brought up by her papa, Jerome, to believe that she could learn anything a boy could. She shares his vision of a future in which everyone, rich or poor, boy or girl, will be taught at least the rudiments of reading, writing, and counting.
Tobias was brought up a second son, but following his elder brother’s premature death, inherits an Earldom and the need to provide it with an heir. He comes to believe that Mariah will make a perfect countess and enrolls her papa’s help in securing her hand.
However, Sir Lucas Wellwood, whose debts have made him urge his sister to attempt to trap Tobias into marriage, has sinister intentions. Mariah suspects Wellwood has been mistreating his sister and she heads off impetuously to rescue her. Will Tobias and his friends reach Wellwood’s home before he can exact revenge on Mariah?

Muse It Up Publishing

Hullo JQ, thanks so much for inviting me along. It's a relief to talk about great stuff like dancing from time to time. Some of the other hobbies have been eye-opening. Best wishes, Anne

Hi Anne, I'm sure you will give people a chuckle today with this post. You're right about the catchy title. Thanks so much for being my guest on Hobby Hoedown!

I would absolutely love to be able to dance, Anne. What a great hobby. We learned a few Scottish dances at school, and they were really good fun - except when I fell over. Thanks for the photo and fun post!

Made me smile, Anne. Do you think you will have any more belly dancing lessons?

Hi Helena, Dancing with arranged steps is a great hobby and you don't have to be particularly talented to have a good time. I fall over too if there's too much of that under-arm turning visible in the pic. I once tried English country dances and really enjoyed them. It's especially good to have a 'caller'. Anne

Morning, Mary, I wonder, too, but the chance hasn't come up again. Did you do local dancing when you worked in the near East? Anne

Hmm, Anne and Helena, falling down while dancing? You must have really been whirling! Sounds like fun. A lot of country dances in the States were brought over from Scotland. I'm sure they would be danced at a Country Hoedown. Yee-haw!

Mary, it would be fun to try belly dancing. But I think I would just enjoy wearing those exotic outfits and not jiggle everything!

Ah, the things we learn too late, Anne. By which I mean that, had we known of this particular skill at Cliff Cottage, you could have entertained us all over lunch.

Hi Anne,
I was never a dancer, but I loved to watch other people. My dad was a 'square dance caller' and I can still recall how exciting that was to watch.

I guess that's what makes Dancing With the Stars so popular.

Anne, you win the prize for attention-grabbing titles. I wasn't missing this post for anything. LOL In my way younger years (BC before children) I took belly dancing lessons. I was pretty good--At least DH liked it when I did it for him. :) So much so, I got pregnant, and just couldn't keep up with the program once I had a "real belly" plopping out there. You know things were so much different back in the day. You did everything to hide that baby bump. Things seem healthier to me today. DH and I have twice taken ballroom. Once when we were still young and just a couple of years ago. We stopped the first time when we got into the lifts. The second time our feet gave out on us. But much fun. Thanks for bringing back the memories.

My brother was charged by a huge pig when he was 2. No laughing matter, LOL. Love dancing. Haven't done it in years. My parents used to jive. I can still see them twirling around the floor. Great post, Janet. Thanks, Anne, and best of luck. Your book intriguing.

Bill, I suppose the seagulls would have got over the shock eventually. From elsewhere, it looks as though one Ros Gemmell may be better qualified. Anne

Leona, I bet you had a lot of good evenings. We call the ballroom prog Strictly Come Dancing and I record it or watch it faithfully. The skills are amazing. I so admire people learning and performing out of their comfort zones. Anne

Marsha, another Belly Dancer? So many people seem to have tried it. DH and I go to ballroom and Latin classes through the winter. Lifts are not an option! We really enjoy it although it can be frustrating when a rhythm just doesn't come right. I worry about my knees a bit, but so far so okay. Anne

Joylene, glad your brother survived to tell the tale. Pigs do grow to quite a size although most animals are bigger than a two year old. DH and I do some jive but without the over and under stuff. It all helps keep our balance going. Thanks for your good wishes.Anne

I wish I could say my DH and I can ballroom dance, but...we kind of just do our own thing on the dance floor but it's nice to be in his arms. So happy everyone came over to see Anne and discovered her book too. Thank you!