Welcome multi-published author Roseanne Dowell to Hobby Hoedown. She certainly has a creative outlet along with her writing skills. She combines embroidery with quilting to produce lovely works of art and functional pieces. First let me tell you about Roseanne.

Roseanne grew up reading first Nancy Drew mysteries and soon moved on to Victoria Holt and Phyllis Whitney. She’s a big fan of Agatha Christie and always loved writing even as a teen, often making up different endings to books, and writing poems.

While working as a school secretary, she decided to take a correspondence course, writing for children. It didn’t take long to realize that even though she had six children, it took someone special to write books for them. So, she tried her hand at nonfiction, but didn’t care for that either.  That’s when she moved on to romance novels. But they sat in the attic along with her poems and journals.
In 2002 at a Book Club meeting, she confessed regret about not pursuing a career in writing. That’s all it took.  Her friends convinced her it wasn’t too late. After giving it some thought, she decided they were right and took another writing course. Within a few months, her first article was published in Good Old Days Magazine. Since then, she’s had several articles published.
In 2006, Roseanne’s first book, Satin Sheets, was published and sold over 35,000 copies. Since then, she’s decided to go the way of the future – E-books.  She writes various types of romance – paranormal, contemporary, mystery and women’s fiction. Her heroines range from their early twenties to late seventies. Yes, seniors need love, too.
Roseanne lives with her husband of fifty years, has six grown children, fourteen grandchildren and two great grandchildren. She spends her time between writing, quilting, and embroidering. She also enjoys blogging, tweeting, facebooking and posting on various writers’ groups and spending time with her family.

# # # #
If you’d like to know more about Roseanne and her books,
check out Roseanne Dowell's website
and Roseanne's blog
You can find her books at Amazon

Although my first love is writing, one of my favorite things to do in my spare time is embroidery. Another is quilting and I’ve found a way to combine the two. I discovered red-work during a quilting shop-hop at one of the shops. I immediately fell in love with it. For those who don’t know what red-work is – it’s embroidery done in all red floss. Just the outline of the picture, not filled in like other embroidery patterns. 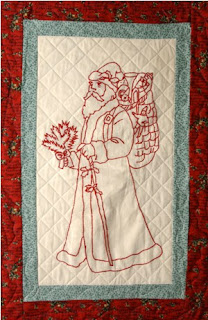 ﻿﻿
﻿﻿﻿Every year I make something for my six children (usually a Santa) and give it to them on Thanksgiving. Sometimes it’s ceramic, sometimes wood. I found this Santa pattern and made one for each of them. It took a while to do six of them, but it was a fun project. 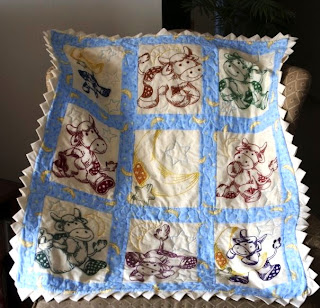 A cow quilt I made for another niece
After making quilts for each of my children, grandchilden and other relatives, I decided to make a baby quilt for each of my grandchildren – not for them, but for their first born. But, where to find patterns? I started out searching coloring books for designs. I traced the images onto 12x12 squares of muslin. No easy feat.  After I finished embroidering the squares, I put the quilt together. For the backing I used various fabrics, generally not nursery prints. None of the quilts have nursery fabric in them at all. That way, they’re not limited to use only as a baby quilt.  I’ve used patterns from animals to Winnie the Pooh.
Eventually, I found transfer books and started using them for designs, which made it much easier. As of right now, thirteen quilts are finished, the last one is embroidered and the blocks stitched, but I still need to be put the batting and backing on and quilt it. Some of the quilts are done in red work, but several are done with various colors, also.
﻿﻿It did take several years to embroider all those squares, but most of them have been done for a while now.
Since then, I’ve also made quilts for my niece’s twins. One of the patterns is kittens and the other is bunnies. She had a girl and boy, so I thought the bunnies would be good for him. 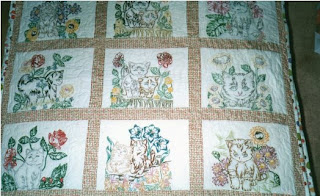 One of the quilts I made for my niece’s twins. Kittens 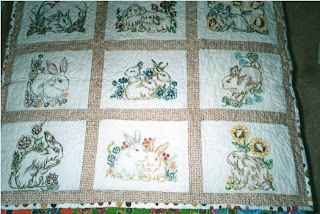 The other quilt for my niece’s twins – Bunnies
Three years ago I gave the first quilt to my oldest granddaughter, who had a baby boy, my first great grandchild.
Each quilt is marked with the name of the grandchild it’s supposed to go to. I hope I’m still around to give each child their quilt, but if not my daughters have been instructed to pass them out. I hope they treasure them. I put them in one of those quilt bags you get from the store to store them.
Yes, I bought a quilt for my bed. But I did make one too, I embroidered wild flowers in each square – and yes, I filled them in, not just outlined. It took over a year to do it, but it was worth it.

People ask where I find the time to do all this. The answer is simple, I have nothing better to do in the evening while I’m watching TV. That’s the nice thing about embroidery; you can sit in front of the TV and still work on it.

My latest book, All in the Family, has just been released by Books We Love. 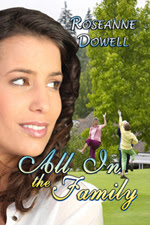 Taking over the police chief’s job in her hometown should have been easy for Callie Johnson. After working in a big city, small town crime would be a breeze.  What a surprise when she arrives to find her grandmother, the judge, accused of murder. As if that wasn’t enough she’s attacked while walking to her car. Between criminal investigations, her nutty family’s antics and her Aunt Beatrice Lulu picking up men for Callie to meet, she has her work cut out for her. Will her grandmother be exonerated?  Can Callie ward off her aunt’s unsuitable suitors? More importantly, can she find the person who attacked her?