YA Author Barbara Ehrentreu on Writing About Your Own Life, Giveaway

Hello and welcome to the J.Q. Rose blog.

My friend and YA author, Barbara Ehrentreu, stops by today to talk about writing about your own life. She has also brought along a copy of her newest release, After, to give to a lucky commenter.

I loved this story written for the YA audience, and I think it will resonate with many of you. In After, Barbara portrays a real family with an emotional situation that many of us have experienced.

Thanks, Barbara for coming in today. We're looking forward to your visit.

Writing About Your Own Life by Barbara Ehrentreu

Many writers think that they have nothing to write about. So they will use a topic that interests them and sometimes this works, especially if what you are writing is non-fiction. But with fiction when you are not invested in a subject it shows. How can you make your writing become part of you without taking away the emotion?

It would seem easy to do if you pick a subject in your life that has either caused you great joy or great pain. However, unfortunately, when you write about events that have affected you emotionally sometimes you can’t show that emotion to other people. I have used a great deal of my life in my second novel, After. But when I was revising this book, with the old title of When My Life Changed, several scenes that I thought would have emotional impact did not convey that emotion at all. I was surprised, because when I was writing the scene I felt all the emotions that had been there during the actual experience. You would think that the emotion would be there in the writing. Funny, though, these scenes had to be rewritten several times until what I had been feeling could be read by other readers. Writing scenes with emotional impact from your own life requires you to step back and observe them as if you were watching yourself during that time. Only when you write with an objective eye can you really show your readers the emotion you felt.

Getting into the head of your character also helps, because you are actually reliving the scene through their eyes. Many of the scenes in After had to be rewritten in this way, because my critique partners felt there was no emotion. So I developed the ability to walk in my character’s shoes through my own life. This isn’t easy and it can only be done if you are very distanced from the event that caused such emotion. So writing about my own experiences during my husband’s heart attack and his subsequent bypass surgery made me understand my own emotions. Then I was able to see them through Lauren’s eyes as a fifteen year old girl and finally bring the emotion that one reviewer has said made her “sniffle.”

Deciding about what to use from your own life can be difficult since you are using people who might read the book who are your relatives or friends. So, especially with this book, After, I made sure that my relatives knew that they were in there, though I did change their names. In my first book, If I Could Be Like Jennifer Taylor, my inspiration was my daughter, who was sort of the basis for the main character and also some of Jennifer Taylor. In that case I needed her permission to use her and of course, she said yes. It can be tricky, especially if you are not showing the characters in a good light. But in my case I only used them in a few scenes to move the story along and they were actually honored to be in the book.

In my own case I started After during NaNoWriMo and didn’t finish it, because I was visiting my husband every day and his condition got a little worse. So I wasn’t thinking about my writing at that time. But a few years later I picked it up again and decided to rewrite it. This book has gone through many rewrites mainly to get the emotional impact right. Since it is about my own husband, who passed away in May of this year, and I was in the middle of editing it at the time, the editing was very difficult for me. However, as I kept working on it I was able to distance myself from this experience. Also having written it made me realize how it helped me to go back over those events and in some ways it was a way to help myself during that time.

Finally, I hope you will decide to read After, because anyone who has dealt with someone in the hospital no matter your age has gone through what Lauren experiences here. Plus, and I don’t want to give away anything, but there is a beautiful love story here and of course a mean girl.
It shows how despite a life changing experience, someone can be helped by it and go on to succeed in her life.
# # # #
After is a story about the struggles Lauren Walstein, a fifteen-year-old girl, has to go through when her father suddenly has a heart attack and undergoes bypass surgery. In one phone call her life changes completely. Lauren is a character with whom most teens will relate. Her best friend since kindergarten, Joey, is going out with her enemy and they have grown apart. Before the phone call all she thought about was getting a scholarship for softball, and the Mets. Suddenly she must deal with both her father’s illness and being in school. The demands on her from both ends complicate the story. In the middle of all this, she finds she is developing feelings for her best friend that are more than friendly. Is he feeling the same or is he just comforting her? In addition there is Joey’s mean girl friend Amber, who doesn’t appreciate Lauren being in the picture. Will Lauren’s father recover? How will Lauren cope with her new feelings for Joey?

Barbara Ehrentreu grew up in Brooklyn and moved to Queens. She has lived and taught in Long Island, Buffalo, NY and Westchester, NY as well as a year in Los Angeles, CA. She has a Masters Degree in Reading and Writing. Currently she is retired from teaching and living in Stamford, CT with her family. If I Could Be Like Jennifer Taylor won second prize in Preditors & Editors as Best Young Adult Book for 2011. It was inspired by Paula Danziger for her children's writing workshop at Manhattanville College. Her second book, After, considers what can happen to a teen when her father becomes ill with a heart attack. It is based on her own experiences when her husband had a heart attack and the aftermath of what she and her family experienced. She is preparing the sequel to If I Could Be Like Jennifer Taylor. Barbara also writes poetry and several of her poems are published in the anthologies, Prompted: An International Collection of Poetry, Beyond the Dark Room, Storm Cycle and Backlit Barbell. She has a blog, Barbara's Meanderings, and she hosts a radio show on Blog Talk Radio, Red River Radio Tales from the Pages once a month.
# # # #

Don't forget to leave a comment to enter the drawing. Winner will be chosen after 9 pm on Tuesday evening.

Thursday, Feb 5-- Romance and Mystery Authors on Writing series features Heather Haven with writing tips on "Getting One's Novel Out There."  You're invited to join the discussion and enter the drawing for a free ebook of Book Four of the Alvarez Family Murder Mysteries, Dead...If Only. 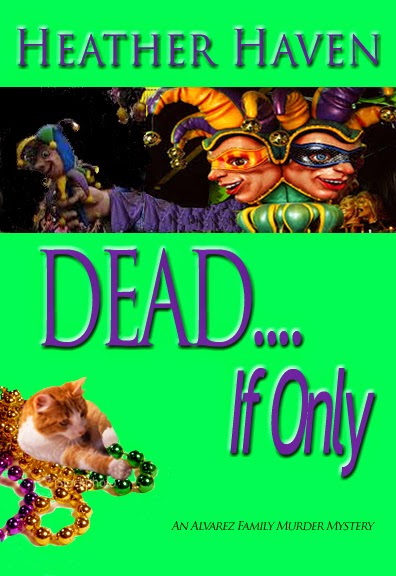 Email ThisBlogThis!Share to TwitterShare to FacebookShare to Pinterest
Labels: After, barbara Ehrentreu, giveaway, heather haven, IWSG blog hop, Romance and mystery authors on writing, This Week. Insecure Writers Support Group, Writing about your own life, YA romance, YA romance After