Hello and welcome to the official Summer Travelogue series on the J.Q. Rose blog. This series has been so fun and interesting, so many great places featured here from all over the world. If you have missed any, please peek at the Thursdays posts beginning after Memorial Day.

Labor Day weekend is the unofficial end of summer, so today, to round out the series with the last of the travelogues, my friend and talented mystery author, Marsha R. West. Ending this summer series on a high note, Marsha is offering a copy of her book, Vermont Escape, to a lucky commenter. Marsha says it was an escape to Red River years ago that was the inspiration for Vermont Escape.  Winner will be chosen after 9 pm EDT on Sunday.
So let's get along to one of her inspiring and favorite destinations, Red River, New Mexico. Get your boots and hats ready for hiking and your favorite walking shoes for shopping. Let's go!


I have really enjoyed JQ’s travelogue and am happy to be able to share about one of our favorite places. Red River, New Mexico. 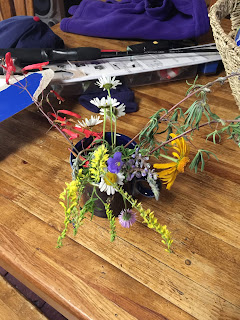 One of my favorite parts about staying there was the scent in the air. It was lavender, and made me just go, “ahhhh”. I wish I could picture that smell for you.


Next I loved the sound of the river. It ran right through the town, and our A-Frame backed up to it. Sleeping with the sound at night was as good as going to sleep to the sound of waves. Walking along beside it either on the road or on the Nature Trial was pure joy.

Even the deer came into town to sip of the river.
Loved all the walking. The Nature Trail was the closest thing to a hike I did.  But family members did quite a bit of the real thing, and so I get to share a couple of their pictures of great vistas.

Pretty good eating options, but you don’t really go to Red River for the restaurants. A taco stand that the whole family loves is closing at the end of this year. The woman retired to Red River and opened up the stand, but it’s been fifteen years, and she’s ready to “really” retire. We’ll miss her food. One of the best taco salads I’ve ever had, I ate there on this last trip.
Texas Red’s is an institution from back before we took the kids when they were little. It’s in a different location, but the steaks and seafood are good and the bands play cool old country with a smattering of new country thrown in. The granddaughters had a super time dancing by themselves and with their dads. 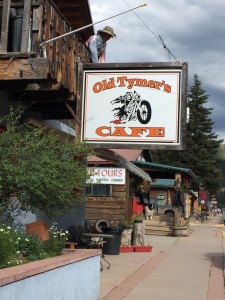 Another place we ate. Small, but yummy, downhome type food.

Then there is the shopping. A highlight for me. (Partly because I can walk to all the stores and do so numerous times throughout our stay.) The Bob Cat is in an old A-Frame and has been there since before when we went with the kids. Currently, it’s run by a woman who picks up unique pieces of Native American jewelry. Last year I bought a silver ring there and one of   our daughter’s bought her husband a knife for his birthday.

T-shirt and sweat-shirt stores abound and include cool kid toys and New Mexican type stuff. Easy to while away an afternoon or two.

One of my favorite stores. Lots of good Christmas stuff.
The chocolate fudge store is superb. I brought back a couple of packages for friends. Besides the river sounds, the lavender scents, and being with family, the highlight of the visit for me is the cool temperatures. Any place I can be to get away from our 100 degree, hot and humid Texas summer weather, I’m a huge fan of. (This summer hasn’t been as bad as some, but anytime you have a few days in a row with the heat index above 100, well, that’s just not good.)

The lifts. Someone was hiking down the mountain!

Do you have a special place for family trips? Do you go every year or do you spread it around several places? Are you one of the lucky few who can stay some place longer than a week? I have friends and neighbors who do escape our heat for the majority of the summer. That has to be sheer bliss.

I’d love to hear from you, and thanks JQ for having me.

# # # #
When a member of the board of a non-profit arts agency in Fort Worth turns up dead, the homicide detective assigned to the case looks at everyone involved in the organization, including the Executive Director.
Addison Jones Greer, divorced mother of two teens, is the Executive Director of Cowtown Theatre. When a board member is found in the costume room murdered, suspicion rests on everyone involved with the theatre, including Addie. She has angered some board members because she wants to fire the Artistic Director. Although she’s warmed him several times, he continues to go over budget for productions. Mike Riley, Fort Worth homicide detective, hates that he caught this case. His sister-in-law dragged him to a theatre fundraiser where he met Addison, the first woman he’s wanted to pursue a relationship with in a long time. Not about to happen now. Addison hasn’t ventured into romance since she caught her now ex-husband in their bed with his secretary. As a result she doesn’t do trust. How could she trust someone who seems determined to think she’s capable of murder? Or worse, thinks her kids might be involved. SECOND ACT is Book 1 of the Second Chances Series. We meet four women, now in middle age, who’ve been friends since they met at summer camp after second grade. Whether they realize it or not, they all need a second chance.

About Marsha:
Marsha R. West, writes Romance, Suspense, and Second Chances. Experience Required. MuseItUp Publishing released her first book, VERMONT ESCAPE, in July 2013. Marsha released the print version of the first book in the fall of 2014. Her second book, TRUTH BE TOLD, was e-released by MIU in May 2014. Both of these are now also out in print. She released (both in print and electronic) her third book, SECOND ACT, Book 1 of the Second Chances Series, in March 2015, Find out more at  www.marsharwest.com She’d love to hear from you.