Meet Logan from Ginger Simpson's Mystery/Romance, Lost in His Eyes

You're in for another treat today, and it's not even Halloween. multi-genre author Ginger Simpson sent over an interview of hcr hunky character in her book, Lost in His Eyes. You gotta love cowboys!

Ginger's Character Interview with Logan Carruthers from Lost in His Eyes

Interviewer:  “Today our guest is the good-looking Logan Carruthers, the hero in Ginger Simpson’s mystery-romance, Lost in His Eyes. Welcome Logan.”

Logan:  *chin dipped and cheeks slightly flushed*  - “Ah, I don’t consider myself as handsome as you make me out to be, but I reckon I am a hero…at least that’s what Harlee called me when I dragged her up from the bottom of the old well.”  *looks up, his eyes wide*.  “Boy, was I surprised to hear a voice say “ouch.”

Logan: “I stopped by the homestead I thought had been abandoned to check it out for my pa.  He talked about buying the land to grow more feed corn for the ever-growing number of cattle people are raising these days.”

Logan:  “The temperature was sizzling that day, and I decided to get a drink, but when I threw the old bucket over the side, it unwound quickly and hit Harlee on the head.”  *clears his throat* “You see, Harlee had earlier tried to fetch water and fallen in?”

Logan:  “The well is pretty old and the stones gave way when she was trying to estimate how much water was left.”  *Fixes a serious gaze on the Interviewer* “The lack of rain is really taking a toll on some folks, and Harlee’s folks were having a shaky start to what they hoped was a new beginning.” *Dips chin and laces and unlaces his fingers in his lap.*

Interviewer:  “I’ll bet Harlee and her folks were glad you happened along.”

Logan:  “Well, Harlee definitely was…at least after she recovered from the fall.”  *Looks up and grasps the arms of his stool* “What really amazed her...and me…her family was nowhere to be found.”

Interviewer:  “You mean they’d gone to town or visiting?”

Logan:  *shoulders squared* “Nope.  The house was bare as a bone.  Not a stick of furniture to be had.  You should’ve seen the look on Harlee’s face when I suggested she might have hit her head a little harder than she thought.”

Interviewer:  “Now you’ve got my interest piqued. Did you find her folks? Was the place really her home?  What happened?”

Logan:  *smiling*  “I sure as heck can’t expect me to give away the ending to Ginger’s book, so just let me say, I first had to believe there really was a missing family, and provide Harlee with a place to recover.  She and my mom were like dynamite and a flame, but that eventually worked out but I’m pretty sure I don’t ever want to live in a house with two women who both have tempers. *he laughs.*

Interviewer:  “So, you’re just going to leave us hanging?”

Logan:  “I wouldn’t say that.  I’ll just tell you that Books We Love, Ltd. is having a Buy One Get One FREE sale on their site, and now is a great time to get a copy.  I gotta say, Harlee and I look pretty smitten with one another on the book cover.”  *Stares into space* “You know, this e-book thing sure is a wonderful thing.  Who would’ve thought you could read on some little hand-held thingy?”


Interviewer:  “I don’t suppose you even know what a url is?”

Logan:  “I’m no dummy.  I may not understand all the ins and outs of this Innernet thing, but I do know if people follow a road map using http://www.bookswelove.com, they’ll find a place where they can click on Miz Ginger’s page.”  *Grins* “Just don’t ask me anymore about it cause that’s all I recall at the moment.*

Interviewer:  “Thank you for being with us today Logan, and I for one, look forward to reading Lost in His Eyes.  Kinda sounds like Harlee found herself a new sweetheart.”

Logan:  *cheeks flushed again*.   “I ain’t telling, but she definitely is a pretty little filly.”

# # # #
Yee-haw! Told ya' you were in for a treat! Now, Partner, wrestle yourself up so you can hop on over to Ginger's blog, Dishin' It Out,  and visit with me. Read my blog post and let me know if you can decide if I'm telling the truth or not.

Insecure Writer's Blog Hop Always on the first Wednesday of the month. #IWSGbloghop Happy IWSG Blog Hop Day ! What is the Insecure Wri... 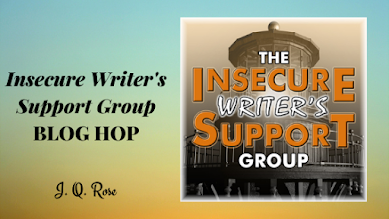