Hello and welcome on this first Thursday in May!

I'm almost giddy with excitement about hosting our two authors this week. Yes, we have two authors to grill, er, ask questions about their writing process. This team of writers also share THE most-often-asked question from readers. Sit back and enjoy getting to know both of these talented authors, Southern author Gail Roughton and writer/publisher Jude Pittman. While both have written successful, amazing stories on their own, they have teamed up to bring their gift for storytelling to create the romantic suspense novel,  Sisters of Prophecy: Ursula.

A lucky commenter will win an e-copy of this book. Please leave your questions for the authors or good wishes in the comment box to enter the drawing.Deadline for entry is Saturday, 6 pm EDST. Good luck!

by Jude Pittman and Gail Roughton

J.Q., thanks so much for having us! It’s great to be here.

Hands down, the number one question readers most frequently ask writing teams is “How do you write a book with somebody else?”  And the answer is, the same way you write any book.  One word at a time. That’s the answer for us, anyway.

We discuss characters and plot lines and what ifs, don’t get us wrong, and in fact, sometimes one of us is actually designated as the particular voice of a particular character or as the driving force behind a particular plot line. But we don’t work on them simultaneously. We do it like we’re sitting around a campfire passing a story back and forth across the flames, you remember the game? Where you end your segment of the story at a highly suspenseful moment and then pass it to the next person and let them weave the next segment of the story?  Well, basically, that’s exactly what we do when we write together. We toss the story back and forth to each other as we sit around a cyber campfire.

Come join us and we’ll roast some smores while we tell you about our first co-written novel, Sisters of Prophecy. (Spoiler Alert: One of the main characters of this novel is an actual historical character who’s an ancestor of co-writer Jude Pittman.)
Back of the Book: Sisters of Prophecy: Ursula by Jude Pittman and Gail Roughton

What’s a girl to do? Katherine Shipton has a painting that talks, an ancestor who won’t stay in her own century, and a former boyfriend with a serious ax to grind against her new fiancé. She already has a full plate, but when said ancestor sends her tripping back and forth between the 15th and 21st century without benefit of psychedelic drugs, the poor girl begins to doubt her own sanity. Then her best friend, a high fashion model with more than her own share of psychic energy, and her troubleshooting aunt show up on her doorstep in response to a psychic SOS Katherine swears she didn’t send. Life couldn't get more complicated. At least, that's what she thinks until her oilman fiancé disappears in the Gulf of Mexico and a DEA agent knocks on her door.

Katherine bit her lip. Moment of truth. Time to stop stalling. Of course it had just been coincidence that the picture talked to her—scratch that. She’d thought the picture talked to her at the precise time she’d seen Quentin for who and what he really was. And it was just coincidence she’d had that damn dream again the night before Quentin’s surprise call out of the blue. Because that hadn’t been a real surprise; she’d always known deep down he’d call. He couldn’t just let go. It wasn’t in him. Still and all, her Quentin epiphany came right after the portrait’s ventriloquist act. The lady in the tower said the portrait had more to tell her. She had to give it a try.
She jerked the tarp off the portrait. And waited. Nothing. Of course nothing. She picked up a brush and loaded the bristles with cobalt blue.
With the first stroke, roaring filled the studio. Katherine dropped her paintbrush, slapped both hands to her ears. Well, she’d asked for it. And she’d gotten it.
“And about time it is, my girl. ‘Tis stubborn you are.” The same bent crone she remembered stood in front of Katherine’s easel.
“Why are you here? Why did I see you before? And why am I seeing you now?”
“You know why, child. In your heart, you know.”
“What did you do to me last time? To make me cringe when Quentin touched me?”
“‘Twas nothing I did. You did it yourself. You opened yourself to what you already knew was true. ‘Tis in your blood, ye canna escape it. I just helped a wee bit with the seeing of it.”
“That had nothing to do with blood. I just finally started putting things together about Quentin.”
Mother Shipton shook her head. “Stubborn. Just like Ursula.”
“I’m not like any Ursula, whoever she is. I’m me. And all I want to do is paint my pictures and marry the man I love.”
“That might be all you want, m’ dear, but ‘tis not likely to happen unless ye listen to your dreams.”
“My dreams haven’t been exactly instruction manuals. I have no idea what they’re telling me!”
“Liar. There’s something you have to do, and if you fail, then you’ll neither marry the man you love nor paint your paintings. ‘Tis doubtful you’ll live a’tall. There’s things need doing. Back in the past, or ye’ll ne’er be born. Dreamed of a lady in a tower asking for help, did ye? And if ye pay no heed, the lives of all between me and thee will be forfeit.”
“I don’t understand.”
“The lady in the tower. What’s her name?”
“I don’t know. I only heard her called Milady.”
“True enough. Well, I’ll give a bit of help with that. She was born Ursula Sontheil. And what’s your name, child?”
“Katherine Shipton.”
“Your whole name.”
“Ursula Katherine Shipton.”
“And why be that, do ye ken?’
“Because both those names have been in the family since the beginning of time and the back of beyond and—oh, shit!”
“Ah, so finally ye see a hint of sun over the horizon, do ye?”
“That’s the reason? The connection? She’s an ancestor?”
“Can’t be telling ye that. Ye must see it for yourself. Time for a journey, child. A journey t’will help you understand. “
“I can’t go anywhere. I have commitments, deadlines.”
Mother Shipton cackled. “This journey—t’won’t be like any ye’ve taken before. None will miss ye nor know you’re gone.”
“I’m having a mental breakdown. That’s it, isn’t it? I’m going crazy and you’re a figment of my imagination.”
“Kitty-Kat, please. Trust me, child. If I don’t exist, I can’t be after hurting ye, now can I?”
“Why’d you call me that? Nobody calls me that but Grandma!”
“Now what else would I be calling a girl named Katherine?” Mother Shipton moved to the sofa on the far wall. “Lie down, sweet girl. Let me soothe that wrinkled brow. And show ye—wonders. Wonders of the past.”
Katherine backed up to the couch and sat down slowly, eyes fixed on the solid apparition.
Mother Shipton cackled again. “Well, ‘tis a start. Ye don’t trust easily and I can’t be after expecting miracles. And a wee bit of caution and common sense bred into the bones over the years, that’s a good thing. Ye think for yourself, don’t take well to being told what to do. Lady Ursula could have done with a bit of it herself, long afore she learned that lesson.”
Mother Shipton laid her wrinkled hand on Katherine’s forehead and rubbed lightly. “Close your eyes, girl. Lean back. And go visiting. To another time. Another place. Long ago. Very long ago. Float, Katherine. Float. None will see ye. None will know ye’re there.”

About Jude and Gail :

Jude Pittman emigrated from Canada to the United States with her mom and brother when she was 14. Her time there included 12 years in Texas where the genus for her first murder mystery  took root. In 1992 Jude returned to British Columbia where she met her husband John. The couple live in Airdrie, Calgary. She’s the author of the mystery trilogy featuring Indian Creek and P. I. Kelly McWinter, A Murder State of Mind (Deadly Secrets, Deadly Betrayal and Deadly Consequences) and Bad Medicine. Descended from the Shipton line, Jude has always been fascinated with the historical and legendary stories about her late and often maligned ancestor, Mother Shipton and her gifts of prophecy. This novel is a work of fiction, but as so often happens, has its roots in reality.

Visit Jude at Amazon and Books We Love, Ltd.
(Note from Gail Roughton—Jude is co-owner with Brian Roberts of Books We Love, Ltd. In her capacity as publisher, she is always on the look-out for talented writers and has made many a writer’s dream come true.)

Gail Roughton is a native of small town Georgia whose Deep South heritage features prominently in much of her work. She’s a retired paralegal who lived in a law office for over forty years, during which time she raised three children and quite a few attorneys. She kept herself more or less sane by writing novels and tossing the completed manuscripts into her closet, most of which have now emerged in published form. A cross-genre writer, her books range from humor to romance to thriller to horror and she’s never quite sure what to expect when she sits down at the keyboard. Now multi-published by Books We Love, Ltd., her credits include the War-N-Wit, Inc. series, my name be Cain…and my color be Se’ben, Vanished, and Country Justice, the first book in the Southern Justice series. Currently, she’s working on Black Turkey Walk, the second Southern Justice novel.

Visit Gail at  Books We Love, Ltd., Amazon, Facebook, and her web-blogs, Writin' With Southern Stylin'! and Flowers on the Fence.

* * *
Thank you stopping in. Don't forget to leave a comment to enter to win Sisters of Prophecy: Ursula. 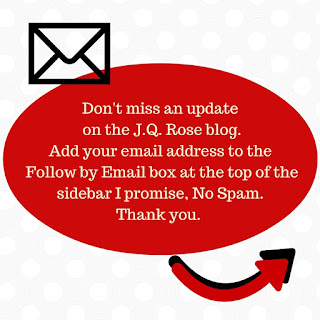