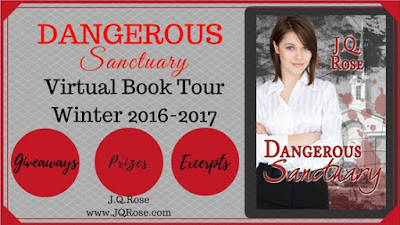 Click here for the Tuesday Books We Love Insider blog when I take you on a tour of a chocolate factory in St. Augustine, FL. Yummy!! Free cyber samples of chocolate shells.

Tis the season of hope, love, peace and joy, but not for everyone. People have relationships that have gone wrong. They're hurting and can't enjoy the festivities no matter how much they pretend they are. If ever there was a time to forgive, the Christmas season is it! People are more open to sharing feelings. If you are ready to forgive someone or ready to accept forgiveness, do it now.

I was inspired to write Dangerous Sanctuary when a friend told me she couldn’t forgive her ex-husband. They had gone through a mean, stressful divorce after he left her for another woman. She was a Christian woman trying to live a Christian life, but she just couldn’t seem to get over his betrayal. Deep inside she had to admit she could not forgive his actions.

Intellectually we know by not forgiving others, we’re really hurting ourselves. We carry a grudge within our hardened hearts. Instead of the horrible burden going away, we seem to feed it and make it grow into hatred that seethes throughout our pores and colors our world black with resentment.

Withholding forgiveness to someone who hurts us only gives us a false sense of power and control over that person. No one likes to have a hammer held over her head with comments like, “Remember when you did so and so?” Bitterness grows and further damages the relationship.

Being the first to try and reach out and forgive someone takes strength and courage. On the other hand it takes an equally loving person to accept the offer of forgiveness. When the attempt is made, the heart soars and shoulders no longer sag under the burden of hatred and anguish.

Forgiveness isn’t easy. It may take a long time to get a different perspective on the hurt, but in the end we can try and do the best we can to resolve a relationship and relieve heartache for both parties.

My main character, Pastor Christine Hobbs, teaches about God’s forgiveness in all things. Even if we don’t feel we are worthy of forgiveness, God’s love and grace is available. All we need to do is ask.
# # # #
Pastor Christine tries to practice forgiveness in her own life, but just when she thinks she has come to terms with her husband’s cheating, lying, and eventual abandonment, she discovers she has not. No one said it is easy to forgive. In order to move on with our lives and gain peace within, Forgiveness is the key.

EXCERPT: from Dangerous Sanctuary when Christine receives a phone call from her ex which starts her stomach churning and her blood boiling.

“So how are you getting along there with your new church position?” His voice moderated. “You may not believe it, but I do think of you and wonder how you are.”
Her eyes teared up. He had no idea how much she missed him and hated him at the same time.
“I’m fine. How’re you?”
“Well, as soon as I get this apartment cleaned up, I’ll be happy. What a job. I never knew moving would be so difficult.”
“You’re moving? Where are you going?” She bit her lip. She hated to sound as if she were the least bit interested in his life.
“Nadia and I found a house.” He delivered it like a hot poker through her heart.
He met Nadia while he was away on a lengthy sales trip. She shook her head to erase the dark thoughts in her mind.
“We decided it was such a good deal, we couldn’t pass it up. I’ll send you my new address. It’s a ranch in a subdivision near that greasy spoon cafe we liked to go to. Do you remember that place? Jake’s.” His remarks were so off-handed.
“Oh, yeah.” Christine remembered Jake’s like it was yesterday.
Jake’s was the place where she told Brad she was pregnant with their baby. She remembered the joy in his face and excitement they felt about beginning their family.
She squeezed her eyes closed, trying to blot out the memory of the night she lost her baby girl in the emergency room. She was all by herself because Brad was away on a business trip. He never understood her feeling of loss, so he tried to act like it never happened. The baby wasn’t real to him as she was to her.
She realized she wasn’t listening to a word he’d spoken, so when Brad stopped talking she said, “Okay. Thanks. Gotta go. Just mail them to the church. Good-bye.” The lump in her throat prevented her from continuing the phone conversation.
Still clutching the phone in her hand, the memories of that Saturday morning conversation over two years ago surfaced in her mind. She and Brad were sitting at the kitchen table. Christine looked forward to spending time with her husband. Having a weekend together was unusual.
“So what are your plans for this weekend? Do you want to take a drive or go to a movie?” she asked as she picked up the cereal box.
Setting his coffee mug on the kitchen table, he looked directly into her eyes.
“I won’t be here this weekend.”
She stopped pouring the sugary flakes of cereal into the bowl. “Oh, really?” She turned to face her beloved husband. “I thought we could do something fun this weekend. We have so little time together anymore.”
“I’m moving out today.” He sat motionless in the chair.
“What? What did you say?” She leaned in closer toward Brad, the cereal box clenched in her hand.
“I’m leaving. I’m moving in with a friend. I want out of this marriage.” He grabbed the cup of coffee and pulled it toward him.
She clutched her stomach to stop the churning inside. Was she dreaming? This couldn’t be real. She tried to read his face, but he kept his eyes on his coffee mug.
She slammed the box of cereal down on the table and curled her hands into tight fists. With each sentence she spoke, her fists hit the table. “Wait a minute. Bradley, wait a minute. What’s happening? What are you saying?”
He glanced up furtively. Finally locking onto her eyes, he said, “I’m in love with another woman. It’s over for us.”

Dangerous Sanctuary is available at amazon in ebook or paperback editions.

Loved reading about some of your inspiration and wisdom.
Juneta @ Writer's Gambit

Thank you, Juneta. I hope the post will help someone break through the wall and take a chance to receive peace.

Hey, JQ. Lovely post. So timely. Forgiving is so very hard to do. Thanks for your words of wisdom. I shared. :) Have a Merry Christmas.

Thank you, Marsha. And thanks for sharing. Merry Christmas to you and your family.