Please welcome author Joan Donaldson-Yarmey to the Readers Circle. She writes many genres as you will learn in her biography.This week she shares her passion as an avid dragon boat racer with us.

Romancing the Klondike is Joan’s latest novel and part of our publisher’s historical series,  Books We Love, Ltd, Canadian Brides Historical Series. This series, partially funded by the Canada Book Fund, is being put out to celebrate Canada’s 150th birthday. The collection includes twelve books-one written for each province and territory.

I belong to a breast cancer survivor dragon boat race team in Nanaimo, B.C. and summer means dragon boat season. We put the boat in the water in April and practice twice a week, Wednesday evening and Saturday morning. We paddle on the strait between Vancouver Island and Newcastle Island Park. The sun bets down and the water is clear and calm. The voices of the steersperson of other teams mix with the beat of their drummers as it carries across the water. Usually a seal we’ve named, Lucille, pops up in the water beside us, or a deer stands on Newcastle Island, or a bald eagle sits in a tree.

Depending on the year we could attend five to six races and festivals on the island during the summer. There is also an International Breast Cancer Survivor Paddling Committee that accepts applications from teams around the world and awards an international festival to one of the teams. These festivals take place every four years and I have been to Caloundra Queensland Australia, Sarasota Florida USA, and will be going to Florence Italy in 2018 to take part.

Back of the Book: Romancing the Klondike by Joan Donaldson-Yarmey
It is 1896 and nineteen-year-old Pearl Owens wants adventure just like her idols Anna Leonowens and Annie “Londonderry” Choen Kopchovsky. In the 1860s, Anna Leonowens taught the wives, concubines, and children of the King of Siam, while during the years 1894-1895, Annie “Londonderry” Choen Kopchovsky became the first woman to travel around the world on a bicycle. She was testing a woman’s ability to look after herself.

To fulfill her dream Pearl is on her way to the Yukon River area with her cousin, Emma, to write articles and do illustrations about the woman and men who are looking for gold in the far north.

Sam Owens, Pearl’s cousin and Emma’s brother, has been searching for gold with two friends, Gordon and Donald, for five years without success. Gordon and Donald have decided their quest is futile and it is time to return home. But Sam wants to stay a while longer. Then they hear word of a new gold find on Rabbit Creek.

Over the next ten months the lives of all five are changed due to love, gold, and tragedy.
About Joan:
Joan was born in New Westminster, B.C. Canada, and raised in Edmonton, Alberta. She married soon after graduation and moved to a farm where she had two children. Over the years she worked as a bartender, hotel maid, cashier, bank teller, bookkeeper, printing press operator, meat wrapper, gold prospector, warehouse shipper, house renovator, and nursing attendant. During that time she raised her two children and helped raise her three step-children. Since she loves change, Joan has moved over thirty times in her life, living on acreages and farms and in small towns and cities throughout Alberta and B.C. She now lives on an acreage in the Port Alberni Valley with her husband and three cats.

Joan began her writing career with a short story, progressed to travel and historical articles, and then on to travel books. She called these books her Backroads series and in the seven of them she described what there is to see and do along the back roads of British Columbia, Alberta, the Yukon, and Alaska. She has now switched to fiction writing switching between mystery novels and about Canadian history.

West to Grande Portage is Joan’s second novel in her Canadian Historical series for young adults. It follows on her first novel titled West to the Bay.

She has had three mystery novels, Illegally Dead, The Only Shadow In The House, and Whistler's Murder published in what she calls the Travelling Detective Series. They come in a boxed set. In her stand-alone novel, Gold Fever, she combines mystery with a little romance.

Joan has branched into science fiction with her two books The Criminal Streak and Betrayed in her Cry of the Guilty-Silence of the Innocent series.

Joan belongs to Crime Writers of Canada, Federation of B.C. Writers, the Port Alberni Arts Council and the Port Alberni Portal Players. Her short story, A Capital Offense, received Ascent Aspirations Magazine's first prize for flash fiction in 2010. She has since turned that story into a stage play and presented it at the Fringe Festival in Port Alberni in 2014. 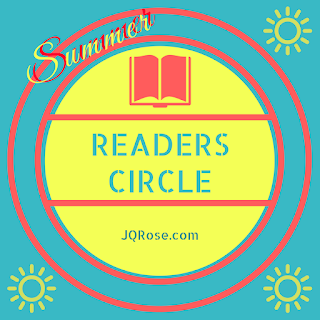 Please join us next Friday, July 7,
when author Gary Rockey takes his seat in the Readers Circle.

That's so interesting about the Dragon Boat racing, Joan. Every year in our local park there is a dragon boat racing event on the river. (We call it a river, but in Canada I think it would be more of a stream :) )I didn't realise this was an international custom.
Love the premise behind Romancing the Klondike. Best of luck with your release!

Hey, JQ. Nice to meet you. Joan. So impressed with you doing the Dragon Boat Racing. I'm not sure I can even manage a kayak, though I hope to try this summer. Good luck with your latest release and all your writing. I shared. :)

Hi Helena, I've seen the dragon boats when in Florida, but not here in Michigan. I'll have to keep my eyes open to see if there are races here. Should be with so many bodies of water in this state.

Hi Marsha, I hope you get to go kayaking on your lake. That seems like a peaceful way to spend the day if you're a good swimmer. Thanks for sharing.

Joan, thanks so much for being my guest this week. How exciting to be a part of the 150th birthday celebration. Happy Canada Day!