Storytime Blog Hop for October!
Logo Credit: Katharina Gerlach
Founded 2015 by students of “How To Think Sideways:
Career Survival School for Writer’s,”
a writing course created by writer and teacher Holly Lisle
Welcome to the Focused on Story blog by J.Q. Rose
and to the quarterly Storytime Blog Hop! 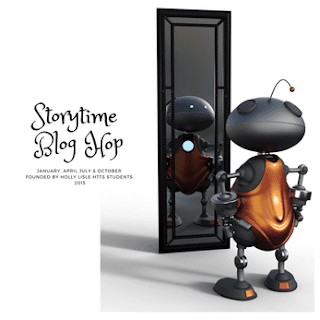 Today, creative, talented writers share short stories to make you happy, sad, surprised, angry and all the other emotions a writer can wring out of you.
Please take some time to escape from reality by visiting writers in this fun blog hop. Just click on the links at the end of the page to take you to the participating bloggers.

🎃 🎃 🎃
October thoughts involve not only fall colors and crunchy apples, but also Halloween tricks or treats. Today, I have no-calorie treats for you--
🎃 a short Halloween story,

🎃 and my romantic suspense novel,
Deadly Undertaking at 25% off.
BOO!

🎃 🎃 🎃
The Witch of Wall Street by J.Q. Rose
Harry noted the black, stiletto heels adorning long legs that disappeared under a tight, black pencil skirt. A black leather belt cinched her small waist drawing the sweater tightly over voluptuous breasts. When he made it to her face, the green eyes flashed in his direction. The smile on his face morphed into a laugh when he spotted the small witch’s cap perched on her long black hair. When she crossed the room to the table by the window, an eerie silence blanketed the room. Every eye in the hotel bar watched as if she were an apparition.
Harry leaned in toward his business partners at the table and asked, “Who is that goddess?"
“I have no idea.” George shook his head. Harry was old enough to be a grandfather, but it never stopped him from hitting on young women.
“Adam, you’re a New Yorker. Do you know her?”
Adam swiveled back to face Harry. “You don’t want to be messing around with her. That’s Venus Devine. She’s known as the Witch of Wall Street. You don’t want to trifle with her. She can cast a spell on you that will ruin your life.” Adam pointed his finger at Harry. “Trust me. Stick with your hot babes from LA.”
“Interesting. Intriguing.” Harry rested his cigar on the ashtray, stood up, and smoothing his tie across his paunch, he said. “I’m going to ask her to join us.”
“Wait.” Adam reached to grab Harry’s arm, but Harry shook him off and marched to the woman’s table.
“Hello,” he said as he approached the table. “Looks like you’re ready to celebrate Halloween. Where’s your broom?” Harry produced his charming smile, the one he used to win over unsuspecting prey. “I’m Harry Hurtz.”
She offered her hand. “I know who you are Mr. Hurtz,” she said. Instead of shaking it, he bent over and gently kissed the back of her hand.
“Oh, I see. A real gentleman.” Her dazzling smile engaged all of his senses. The softness of her hand, the floral fragrance of her body, the low velvety voice bewitched him.
“Ms. Devine, if you’re not meeting anyone, would you care to join us at our table for a drink?”
“I have a few minutes before my driver comes to pick me up to take me to a Halloween party. I’d enjoy sharing your company for one drink.” She punctuated her timetable by holding her index finger in the air. She gathered her bag and slipped out of the chair. Harry offered her his arm and escorted the gorgeous woman to his table where his partners sat.
“He did it again. What is it about Harry that charms the ladies?” George rested his elbows on the table and laced his fingers together.
Adam slicked back his hair with his hands and wet his lips. “Oh come on. You know it ain’t his looks. It’s his money and powerful contacts.” He smirked. “That’s what I like about hangin’ out with the old guy. Plenty of pretty girls.”
They both stood as Harry pulled out the chair for her, grabbed his chair and sat close to her. As he made the introductions, his grey eyes gazed into hers.
After the third drink and lots of fun and flirting, Venus said to the men, “I’m going to a Halloween party.” She fondled the pendant hanging from a thick gold chain around her neck. “Let’s take our little party here and move it to where the action is.”
The men grinned at each other, then Harry said, “Well, I know I can accompany you, but these guys have other plans, don’t you, boys?” Harry raised his eyebrows and shot them a threatening look.
George said, “Oh, look at the time. My wife’s been waiting to go to dinner with me. Sorry, I can’t go, but you two enjoy the revelry.”
“Adam, too bad you and your buddies already planned a Halloween party, eh?”
“Oh, yeah. Guess I’d better run. I’m in charge of, um, something. You guys have a good time.” Both men said their goodbyes and disappeared into the crowded hotel lobby.
“Well, looks like it’s just you and me. Shall we notify your driver we’re ready,” Harry asked.
After texting the driver, Harry escorted Venus through the elegant lobby arm in arm. Harry puffed up his chest and stood taller enjoying the attention and whispers their combination aroused.  A black, sleek Rolls Royce pulled up to the door. The driver got out of the car and opened the back door curbside for the couple to enter the vehicle.
The car pulled out into the bustling streets of the city and disappeared in traffic. One hour later, the Rolls pulled up in front of the hotel. The driver got out of the car and opened the back door curbside. A fat toad with grey eyes hopped out of the vehicle and up on the curb.


“Happy Halloween.” the driver said as he slammed the car door and drove away.
The End 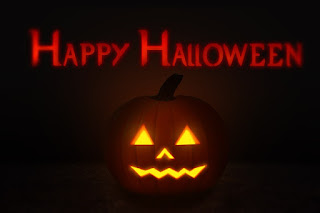 Especially for Halloween, another treat. My mystery, Deadly Undertaking, is now 25% off at Smashwords. 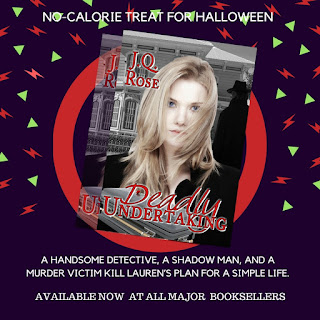 Deadly Undertaking by J.Q. Rose
Click here to download this ebook for $2.24
Use the code AS94U at checkout


Thanks so much for stopping in. Please visit the following bloggers for even more Halloween treats!

Oh dear! I can only imagine what he did in the back of that car. LOL

LOL Amy! Thank you for stopping by.

What a perfect ending!

Perfect ending. I LIKE Devine. Write more about her. ;-)

That was great fun read. Juneta

Katharina, Glad you liked the ending. Hmmm...maybe I could keep Devine around--for next year?

Juneta, thank you. Fun is what I hoped readers would think!

It was a fun story, I liked the title and the names and the Halloween mood :3

Oh, I definitely want to see more of her. That woman could carry an entire book.

Hi Fanni, Thank you. For some reason the title came to me right away. The names too. Did you notice that Harry is based on another man whose name starts with H and is in all the news stories? Harvey Weinstein. I think he should be turned into a fat toad and stomped on with a stiletto heel! Sorry, I am venting. Thank you for stopping in.

Hi Karen, I guess I'd better consider keeping Venus Devine around for another story. Thank you.

Uh oh! I guess he should have listened to his friend. :)

I liked the descriptions at the beginning, but the second I read they were New Yorkers, the story grabbed my attention and didn't let go.
I was wondering what was going to happen to Harry. :)

Hi Kami, Friends sometimes do offer wise advice. Thanks for stopping in.

Hi Susan, I know you love New York!! Glad you enjoyed the descriptions. Thanks for reading!!