Welcome to the Focused on Story Blog and to the kick-off of a new guest author series, The Five W's in Story. 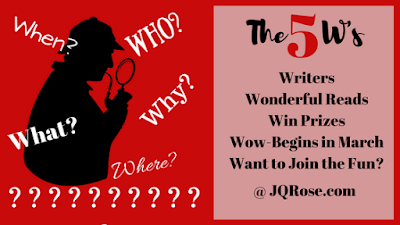 One of the basics when learning to be a writer is to listen to a lecture on the Five W's and the H. The 5 W's are the essence of a story and since we are focused on story at this blog, we need to realize just how important working out the 5 W's can be to creating a great story for your readers.

You will find this series with my guests informative and entertaining and not a stuffy lecture in a dusty, old classroom with a professor palavering on and on and on.

I asked author Kami Kinard if I could use part of her article about the Five W's originally published on the Nerdy Book Club site. She graciously allowed me to re-publish this explanation of the Five W's.

From Kami's article, Every Story a Mystery-- "Now, as an author, I often find myself sitting at my keyboard asking myself “The Five Ws and One H” questions. If my main character feels like she needs to prove herself, then there has to be a reason for it. There has to be a WHY. If she is upset about a friendship, I need to know WHAT happened to her to make her upset. If she is going to overcome an obstacle, I need to know HOW she is going to do it. Everything that happens in a book has to happen for a reason. And If we authors get it right, then these reasons add up to characters who are believable – characters our readers care about enough to keep turning pages because they want to know WHO, WHAT, WHEN, WHERE, WHY and HOW."

Now you can see how important knowing the 5 W's in your story can be. I also find when I write them down, it is easier to develop a synopsis for the story.


Historical author Rosemary Morris is my first guest in the series. She is a multi-published author and today she shares an overview of WHO, WHAT WHERE WHEN AND WHY in her stories. I didn't ask the authors to include HOW because that may contain a spoiler to their story.

Rosemary, thank you for joining us all the way from England today. I have set out a pot of Constant Comment tea and scones for us to enjoy while we visit.

Thank you, Janet. I'm glad to be here.

Rosemary brought along an e-book to giveaway. A lucky commenter will win a copy of Far Beyond Rubies.  Deadline to enter is Sunday, March 19 at 9 pm ET.

In a review for this book, I wrote--"When I read this historical romance, I felt I had stepped into the 18th century. Ms Morris has done her homework to bring us such a rich story with all the historic background and social graces of the era."

WHO, WHAT, WHERE, WHEN, AND WHY by Rosemary Morris

Before I write the first line of a novel I name the main characters. I write romantic historical fact fiction, so I consult the Oxford Dictionary of English Christian names before I baptise my hero and heroine. Also, I make sure the names of secondary and minor character are appropriate for the era my tale of past times will be set in. (I couldn’t imagine a medieval knight whose Christian name was Wayne, I leafed through the romance and decided not to buy it.)
After I have chosen the names, I fill in detailed profiles for the main characters and briefer ones for minor characters.
I am not ready to write until I know the hero and heroine so well that they seem to be real people. I make notes of their ancestry, their family, their education, the music they enjoy, their eccentricities, their good and bad characteristics and much more.
The characters occupy my head for a long time while I get to know them better.
Do they have any mannerisms or idiosyncrasies? I ask questions about their social status, upbringing and environment, occupation, politics, relationships, religion and other matters.
Finally, I want to know what motivates them. For example, to name a few possibilities, duty, greed, jealousy, revenge, self-sacrifice e.g. wife for a husband, husband for a wife, mother for a child, father for his children, patriot for his or her country.

I don’t plan my novels in detail because I like my characters to surprise me. Once, I plotted each chapter of my novel before I began to write. This method didn’t work for me. I felt as though I and the protagonists were in a strait jacket.
Before I write the first chapter I sympathise with the problems the characters must face and introduce the conflict immediately.
What happens next is up to them, and I experience the thrill of finding out, so, I hope, do my readers.

There is a gigantic canvas for a historical novelist to choose from.
My novels are set in the reign of Charles II’s niece, Queen Anne Stuart, who reigned from 1702 to 1714, and the ever-popular Regency era. I have also written a mediaeval novel set in in the reign of Edward II.
I chose those periods because each of them affected the course of history. If the Duke of Marlborough had not won The War of Spanish Succession, and The Duke of Wellington was defeated by Napoleon at The Battle of Waterloo, the history of Britain and Europe would be different. Defeat would also have had far-reaching consequences for other countries. If Edward II had won the Battle of Bannockburn, it is feasible that he would have conquered Scotland and, perhaps, as it is claimed, he would not have been murdered.
There are other eras that interest me in which I hope to set future novels.

So far, with one exception, my novels are set in ancestral houses and estates and in fashionable parts of London where the nobility lived and the clubs, and functions they attended.
My medieval novel, is set in castles, manor houses and peasants’ cottages.

Cause and effect answer the question, why something takes place, whether it is a person’s action or a historical event which will direct subsequent events.
My passion for history answers the question why I write romantic historical fact fiction which I spend hours researching to avoid characters dressed in costume, who behave as though they live in the 21st century.

Back of the Book:
When Yvonne and Elizabeth, daughters of ruthless Simon Lovage, Earl of Cassio, are born under the same star to different mothers, no one could have foretold their lives would be irrevocably entangled.
Against the background of Edward II’s turbulent reign in the fourteenth century, Yvonne, Lady of Cassio, contains imaginary and historical characters.
It is said the past is a foreign country in which things were done differently. Nevertheless, although that is true of attitudes, such as those towards women and children, our ancestors were also prompted by ambition, anger, greed, jealousy, humanity, duty, loyalty, unselfishness and love.
From early childhood, despite those who love her and want to protect her, Yvonne is forced to face difficult economic, personal and political circumstances, during a long, often bitter struggle. 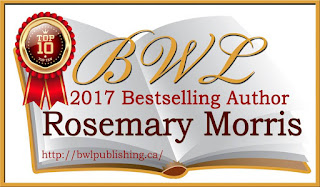 I was born in Kent. As a child, when I was not making up stories, my head was ‘always in a book.’
While working in a travel agency, I met my Hindu husband. He encouraged me to continue my education at Westminster College.  In 1961 I and my husband, by then a barrister who read law at Inner Temple, moved to his birthplace, Kenya. I lived there from 1961 until 1982. After an attempted coup d’état, four of my children lived with me in an ashram in France.
Back in England, I wrote historical fiction, joined the Romantic Novelists’ Association, The Historical Novel Society, Watford Writers and on-line groups, and am now published by BooksWeLove Inc.
Apart from writing, I enjoy classical Indian literature, reading fiction and non-fiction, visiting places of historical interest, vegetarian cooking, growing organic fruit, herbs and vegetables and creative crafts.
My bookshelves are so crammed with historical non-fiction, which I use to research my novels, that until that if I bought a new book I considered getting rid of one. However, I am converting the small spare bedroom into a study and have ordered a 6ft high 8ft wide bookcase to solve the problem.
Time spent with my children and their families, most of whom live nearby is precious.
However, much of my time is spent researching my romantic historical fact fiction. The more I read about past times, the more fascinated I become, and increasingly aware of the gulf between the past and present. Our ancestors shared the same emotions as we do, but their attitudes and way of life were, in many ways, very different to ours. One of the most striking examples was the social position of women and children.
Research sparks my imagination. The seeds of my novels are sown, and from them sprout the characters and events which will shape their lives.
* * * *
Connect online with Rosemary:

Thank You--Huge thank you to Kami Kinard for sharing a bit of her article posted at the Nerdy Book Club. Click here if you would like to read the complete article, Every book is a Mystery by Kami Kinard.

Thursday, March 15 and 16 I will be a guest at multi-published author Victoria Chatham. Victoria asks some refreshing new questions that made me think. Click here to visit.

Hi Rosemary, Thanks so much for participating in this new series. I think we're kicking it off nicely with your post on the W's.

It takes skill to take a reader back in time an make that world pop. :-)