Please welcome fantasy author Karina Fabian to our Hobby Hoedown feature. She's stopping by while she is on her Greater Treasures Book Tour May 1-31. Here’s your chance to win a free electronic copy of Greater Treasures.  Leave a comment or question for Karina, Vern, or Sister Grace. I'll pick the winner at 9 pm EDST on Thursday, May 16.

Oh, wait a minute, Readers.  Her main character, Vern the Dragon, is whispering in my ear...Hope he's not a fiery dragon while I'm listening.

There has been a change. Karina sends her greetings to all of you but it seems Vern would like to share his hobby with us while Karina is on her tour. He's quite a character, so let's find out about Vern's hobby.
(Side note: Karina will be back with HER hobby in August.)

Considering I’m a dragon, it shouldn’t surprise anyone that I’m a collector.  Yeah, treasure’s great, though perhaps not for the reasons you think.  We’re really not so interested in collecting a big pile of gold for its value as much as its color, its coolness, the way it rubs in our scales…oh, now I’m homesick for my pile!  To a dragon, there’s nothing as cozy.  (Although I am fond of my pile of mattresses and pillows that makes my nest here in the Mundane, except when the roof leaked and they got damp.  Dragons do not like damp.)
As far as collecting for collecting’s sake, I personally was into rare artifacts with interesting stories.  I had a love letter from Baldur to Hella.  Yep, he actually missed the Emo Maid of Norse Mythology.  She has it now, though.  I traded it for her father, Loki, who was doing his latest pennance in Helheim among the blind-deaf-mutes.  Oh, and her brother’s intestines to tie Loki up in.  It’s a Norse thing.  You can read about it in Live and Let Fly—after you finish this article.
My territory spanned the Mediterranean, so I have a lot of trinkets from Europe, Africa, and the Middle East.  I have a statue of Anubis that I liked to mention to him now and again.  It’s a terrible likeness, yet caught his inner person, I thought.  He disagrees rather vehemently.  I have a Sumarian fertility symbol, not that an androgynous creature like me has need for it.  I have a little replica of the Ark of the Covenant; yep, they had souvenir drek in Solomon’s time.  I got a wizard to bespell it so it looks bigger than it really is; I loved watching people’s reactions.
Ever wonder why dragons favor caves?  Climate control.  I’ve got a lot of wonderful pieces back in my cave at Caraparavalenciana that would have otherwise succumbed to time, weather, and the handling of humanoid hands.  See?  Dragon collecting has purpose.
Of course, all that is temporarily on hold for now.  Vows of poverty working for the Church and all that.  Doesn’t stop me from collecting, however.  Now, my collections are more intellectual:  information, memories, unique experiences.  And if I can’t have the souvenir, at least I’ll have something to ruminate on when my stint serving God through the Church is done.

Thanks, Vern. Be sure to check out Vern’s other tales at Dragon Eye P I

Winner of the 2010 INDIE for best Fantasy (Magic, Mensa and Mayhem), Karina Fabian has imagination that takes quirky twists that keep her--and her fans--amused. Nuns working in space, a down-and-out Faerie dragon working off a geas from St. George, zombie 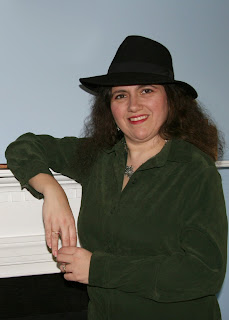 exterminators—there’s always a surprise in Fabian’s worlds. Mrs. Fabian teaches writing and book marketing seminars, but mostly is
concerned with supporting her husband, Rob Fabian as he makes the exciting leap from military officer to civilian executive, getting her kids through high school and college, and surviving daily circuit torture…er, circuit training.  Read about her adventures at http://fabianspace.com.

Thanks for hosting Vern today. He loves to talk. As questions, folks, about his hobby, any of the stuff he has, whatever. He'll be glad to answer.

So glad Vern is here. I do believe he is quite a talker!!

Hi Marian, thanks for stopping in. Vern is quite the character!!

Climate control? That's brilliant! Dragons are so much smarter and more resourceful than humans.

This was fun. Thanks, ladies and Vern.

JQ, it's great to meet you, thanks to IB Nosey and your comment over there.

Hi Robyn, good to meet you too. Thanks so much for visiting Vern. Quite a new experience for you I'm sure.

Congrats to Marian! She won Karina Favian's Greater Treasures e-book. Watch out Vern, Marian will be reading all about you soon.

Thanks to Karina and Vern for kicking off the hobby hoedown event. Ya'all come back every Thursday to discover another author and their hobby.