Please indulge me for a minute to remind everyone in the West Michigan area to attend the Author Event at the Artsplace, downtown Fremont, Michigan tonight (Thursday) at 6:30 pm. A panel of four authors (including me) will be discussing what stirs inspiration. Questions from the audience are welcome!

Now, please welcome author Marsha West to this week's Hobby Hoedown feature. When I planned to offer this event every Thursday, I had no idea we would be treated to so many different kinds of hobbies. Author interests are wide and varied. Marsha's hobby is attending theatre performances, not only for own enjoyment, but for a very important reason. Read on to find out what that is!

Congratulations to Marsha on her new release in July, Vermont Escape. Information on this romantic suspense novel is at the end of the article.

Hey, JQ. Thanks for inviting me. My hobby is a bit odd. We’re talking about theatre. (Please note this is the correct spelling for the word when referring to a show on a stage or in the round. When it’s “er” on the end, that’s for a movie house.) For the last four years during the late fall and early spring—December through March, my younger daughter and I have attended high school musicals. Often several in one week. She is a judge for the Betty Buckley High School Musicals Awards. I’m the-go-along-with. You may remember Betty Buckley from the TV show Eight is Enough. She’s starred on Broadway in 1776, a role she won after only one audition! In CATS, she’s the one who sang “Memories.” And many other roles and recordings. She graduated from my daughter’s high school and performed in many shows at Casa Manana, the regional theatre, which sponsors these awards and named them in her honor.
Sometimes my daughter and I drive 45 minutes to get to the location. Tarrant County covers a large area. She was a dance performance major in college and after several years of traveling the country in bus and truck tours, she and her husband settled here in Fort Worth.

She has her own Pilates studio and still choreographs. I taught high school theatre years ago, and performed in community theatre for a short time. It's been a fun time for us, connecting over our passion.

Let me tell you, these high school theatre departments produce shows of high quality. For the most part the kids in the lead roles are triple threats. In the business, that means they sing, dance, act and all well. That’s what it takes to make a living. Are they all going to go on and major in musical or technical theatre? No, but they have an opportunity to see if this is what they want.
Okay, as a former educator, I’d be remiss if I failed to point out all the crucial things kids learn from being involved in theatre/choir/orchestra. I’ve included the last two because in many schools this is collaborative endeavor between those three departments. Students develop responsibility and learn to juggle all their jobs: keeping grades up, other extra curricula activities, learning lines and choreography, communicating with family members, problem solving, being where they’re supposed to be­––prepared and on time. They learn that in most important activities, it’s not just one person who makes the endeavor successful. It takes all the participants, cast, crew, volunteers giving their all. Hey, sounds like the kinds of things we’d want all of our citizens to know and understand! Okay, climbing off my soapbox.
This competition is held throughout the United States. Awards go to outstanding choreographer, lighting, set designers, and orchestra (which can have no more than two adults playing to be eligible). The overall best musical is selected. Outstanding students are recognized for Male and Female Lead, Male/Female Supporting Character, Male/Female Ensemble Member.
This ensemble member is the person with a smaller number of lines, who sings with the group, maybe is only highlighted for a line of song or a 16 count dance piece. They’re the ones filling up the stage, always in character and acting whether they have any lines or not. They aren’t showboating and calling attention to themselves and away from the leads. They give the stage picture fullness and variety. They help make the stage look real—whether they are town folks in BRIGADOON or people in the town of River City from THE MUSIC MAN.
The top Male & Female leads get the opportunity to go to New York City for an intense, weeklong study with other winners from across the country. Awesome experience!
After the performance, my daughter writes a critique of the show, characters, and director. Sometimes she questions decisions the director makes. Several judges attend a school’s performance, never just one. At the end of the season, the judges get together to compare notes and nominate kids for the different categories. For any shows the judges miss, they’re able to watch a video. They compile the nominations and then they vote.
In late May, an Awards Ceremony is held, very much like the Tony’s. Those in attendance (I’ve been three times, my daughter has been out of town all four years!), are treated to a number from each of the shows nominated for best musical. In most cases, it’s been some time since the kids performed the number, and they aren’t performing on their home stage, still they do an amazing job. All the kids in attendance are dressed to the hilt. There’s definitely a festive air about the event. Winners come up on stage and make acceptance speeches. It’s really quite moving.
I don’t know if my daughter will continue to judge. It’s fun, but takes time from her husband and daughter. I give up time with my husband and the friends we usually have Friday night supper with. But I wouldn’t take for these four years and the wonderful times with my daughter. Watching such great performances shows me American Theatre is in in capable hands
So it’s your turn. Have you ever been in a high school play or musical or attended one? Seen anything on Broadway! What did you like best from those experiences? Love to hear from you.
# # # # 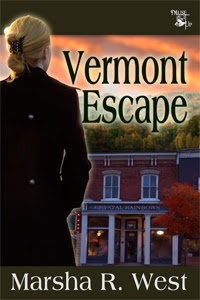 Back of the book for VERMONT ESCAPE
Two years after the murder of her husband, someone guns down Jill Barlow’s father, a Texas State Representative. The authorities suspect a connection between the murders, but can’t find proof. Jill longs for the peace she found when she visited Vermont after her husband’s death. With the perpetrators still at large, she flees to the small town of Woodstock.
The gambling syndicate, believing she has damning evidence against them, pursues her, shattering her dreams of peace. In an effort to protect her grown children, she doesn't tell them violence continues to stalk the family.
Despite having lost so much already, with the lives of her family and friends at stake, will Jill be required to make more sacrifices, even the hope of a second chance at love?
VERMONT ESCAPE was released July 19 in all e-formats.

Marsha R. West, a retired elementary school principal, is also a former school board member and threatre arts teacher. She writes romantic suspense where experience is required. Her heroes and heroines, struggling with life and loss, are surprised to discover second chances at love.
Marsha, who loves to travel, lives in Texas with her supportive lawyer husband. They’ve raised two daughters who’ve presented them with three delightful grandchildren. She admits to being at the beck-and-call of two dogs, who run her home.
She’s currently editing her latest work in progress.  She’d love to hear from you.