Dear Readers, when you finish reading this post and commenting, please hop on over to the Girls Succeed Blog where another MuseItUp Author, Katie Carroll, tells us how she became a writer and  introduces us to her new YA Paranormal Fantasy, Elixir Bound. Be sure to enter to win prizes during her book tour!!
Katie and I are swapping blogs, so take another hop over to Katie's website to discover what sparked the penning of my non-fiction e-book for girls, Girls Succeed.

Today marks a first at Hobby Hoedown, hosting a brother and sister writing team. Author Heather Fraser Brainerd is here today with her passion, Disney Parks. Her brother and co-author, David Fraser, was a guest on August 15 displaying his skills in building model planes. They may be siblings, but they don't seem to have the same interests when it comes to hobbies. Heather confesses she doesn't remember David building planes when they were kids. Probably because she was off playing with her Barbie Dolls...

I was happy to hear that JQ’s hobby hoedown had been extended into autumn. After enjoying her other hobby posts, and wishing I could participate over the summer (but I just didn’t have time!), this seemed like a fun way to kick off the fall.

But what to write about? Quilting? Yoga? Cookie-baking? Dollhouse-building? I have lots of hobbies, but the one that I’m most passionate about is…
Walt Disney World!
I write a Disney-related blog (disneyforfive.wordpress.com), collect Disneyana, comb the Internet for Disney-related news, am a member of D23 (the official Disney fan club), and recently became a Disney stockholder. Okay, so maybe it's not so much a hobby as it is an obsession!

The seeds of my obsession were sown long ago. I was fortunate enough to live in Florida for several years as a child. Whenever family or friends would come from New York to visit, we’d go to Disney World! After we moved back to New York, our Disney trips became less frequent. When I was a teen, my parents took all four of us kids (I’m the oldest) on a Disney vacation. A couple years later, my senior trip was to Disney World. After that, a twenty-year dry spell ensued, from 1989 to 2009.

In that time, I went to college, got married, had a son, got divorced, and went through the daily grind of handling workers’ compensation insurance claims. After my son turned five, I started to dream of taking him to my favorite place. I did the online research, talked to friends who had taken their kids to Disney World, even contacted a travel agent to make preliminary plans. Instead of going to through with those plans, I met a man.

He’s a very, very good man.  A year and a half later, we were married, and I left my insurance career behind to stay home with my son and my two new stepsons. A year and a half after that, we took our brood to Disney World!

With that first family trip, all five of us were hooked! There’s just something about being there, right in the middle of the magic, that makes you feel like a kid again. Everywhere you go in each of Disney World’s four parks, something magical is happening. Everything is spotless. The staff members (called “cast members” in Disney lingo) are incredibly helpful and unbelievably nice. As Walt Disney said, “Give the public everything you can give them, keep the place as clean as you can keep it, and keep it friendly.” All these years later, his words of wisdom live on.

Thus began my obsession. I started researching Disney World history, news, and rumors, wanting to know every detail about this magical place. Quickly realizing that there are not many resources for larger families, I started my blog, Disney For Five+, to help other big families with their planning.

My one Disney collectible (a 1980s Snow White music box that plays “Someday My Prince Will Come” – how true that turned out to be!) has been joined by an increasing number of Disneyana pieces. I’ve yet to go to a D23 Expo, but hope to someday soon.

We recently took our three boys to Disney World for the fifth time, and I’m already in the preliminary planning stages for the next trip. For us, it really is the happiest place on earth.

Heather Fraser Brainerd is a renaissance woman. After earning a degree in Anthropology, she embarked on an incongruous career as a workers’ compensation insurance adjuster. She 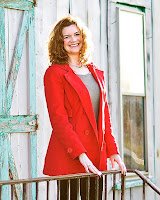 rapidly climbed the claims-handling ladder before surprising her colleagues by leaving the high-powered world of lumbar strains and carpal tunnel syndrome to run a child care center. Thousands of dirty diapers and gallons of strained peas later, she decided that maybe the insurance industry wasn’t quite as bad as she remembered. It was. Fortunately, a few brief years into that second stint, she was swept off her feet by the most wonderful man in the world. Now a stay-home mom to three amazing boys, she is able, at long last, to focus on her writing. In addition to her fictional explorations, she writes a foodie column for the Rochester magazine Citizen. Heather lives in New York with her family and their crazy pug/terrier.

Thanks so much for hosting me, JQ! I just love sharing my obsession with the world!
BTW, it looks my castle picture didn't load (at least for me - hopefully it works for other people). If anyone wants to see it, here's the link:
http://disneyforfive.files.wordpress.com/2013/03/heathers-castle.jpg
My photographer husband took it, so it's worth the extra click! :)

Heather, I'm so glad to have you here. Disney truly is a magical place to visit. I'll check out the castle problem!! We princesses definitely need a castle!

Great post! I turned 60 this year and told my sisters and mom I wanted to go to Disneyland! I hadn't been in so long (not since my kids were little) and my hubby wouldn't be able to walk the whole park, so off we went. Even my 83 year old mom had a blast!

Your book sounds fabulous Heather! It's on my list!

Thanks for stopping by, Penny (and for your interest in our book!). What a wonderful way to spend a milestone birthday!! I've never been to Disneyland (just WDW) but definitely plan to get out there someday. Hmm... maybe for my 50th? :)

I too love Disney World and Disneyland. I have been there eight times, so you see I am a big fan and I live in Wisconsin. It is a major trip.

Thanks, Susan. Wow, that IS a big trip for you!!

Great post. It's been years since I've been to either Disneyland or Disney World.

Thanks, Susanne! Maybe it's time for another visit. :)

Penny, there's something for everybody at Disney, for sure!

Susan, I've never been to Disneyland either, only when I watched the Mouseketeers!!

Susanne, when we go to FL in the winter, we are about 2 hours from WDW. We just like to ride the monorail around the park, especially at Christmas time (for free) and go to Downtown Disney to get our "Disney fix."

I've been to Disneyland but not Disneyworld. Ha! I plan on going there next year. Much success with the book.

Thanks, Lorrie! Have fun planning your trip. Let me know if you have any questions - I never tire of talking Disney!!

Hi Lorrie, take your walking shoes and be prepared to spend a LOT on a bottle of water. Heather, do they allow visitors to bring in drinks and snacks?

Yes, snacks and drinks are allowed to be brought into the parks (no glass bottles). We used to bring in our own food, but it's so much more fun to get it there! I mean, who can resist Mickey-shaped ice cream?

I went to the Disney Land in Cal., took a ride on the Matterhorn and never had so much fun!!! Screamed my head off as we whizzed around the corners and ..... my kids were too busy giggling to pay me any attention. Yes, Walt Disney designed a great form of entertainment.

You said it, Margaret! I love that the origins of Disneyland came from Walt's simple desire to go on rides with his daughters, rather than watching from the sidelines. Look at all that has grown from a dad's love!

I want to visit Disneyland too! The continent is simply too big, that's the problem.

Love the cover. It's got a sassy attitude.

Disney's history is fascinating. I think the next answer ti the author interview question of who I'd like to meet living or dead is going to be Walt Disney! I bet he was an amazing dad. Thanks Margaret and Joylene for stopping in at the J Q Rose blog!!

Thanks, Joylene! The main character, Josie, has a sassy attitude, too!
And JQ - I actually answered that question with "Walt Disney" in an interview once! Big surprise, right? :)