Meet Gloria in the Paranormal Mystery,Terror on Sunshine Boulevard Excerpt

Hello and welcome to the MFRW Authors Blog Hop event! Every Wednesday authors can participate in this hop to introduce readers to new and favorite authors and discover their books. Please check out the list of bloggers who are sharing their books below and hop along on a journey to find great reads by seeing the book covers and reading excerpts. A whole wide world of adventure and romance awaits you!


Excerpt from Terror on Sunshine Boulevard by J.Q. Rose

Gloria re-shouldered her heavy bag holding her water bottle and barbells, and moved her rolled exercise mat under her arm to keep it from crushing against her chest. She dropped her bag on the floor and unrolled the mat in the spot she always claimed at every class meeting. Like pew seats in a Sunday morning church service, each person staked out her favorite “place” to exercise and kept it.
She hustled over to join the big circle of friends in their usual space in the room. The ladies shifted a bit to make space for Gloria in the circle. She breathed a sigh of relief knowing she wasn’t late again. Being late was a sign of disrespect, but Gloria respected every gal in this room for exercising their bodies and joining in the group. Perhaps they didn’t all do the moves like their limber instructor, Bridgett, but at least they tried.

“Good morning, everyone.” She smiled widely as she greeted her friends. But instead of the usual happy chorus of “Good morning Gloria,” her friends in the circle weakly smiled with the acknowledgement of her presence. Silence fell over the group. Everyone’s eyes lasered in on her. Gloria felt uncomfortable. What were they waiting for?

Finally her friend Pamela asked, “Well, are you going to tell us about George McDonnell?” Her voice a higher pitch. “Did Jim hear anything yet?” Pamela’s voice ratcheted even higher.

“Uh, no. We were gone all day.” The unexpected news slammed her like a wild pickle ball, nearly knocking her off her feet and stinging her heart. George was younger than she was for Pete’s sake. He couldn’t be dead. That was incomprehensible to her. She and her husband had just visited him last week. He was a healthy man for his age. Tears stung her eyes when she remembered how excited he was about a fishing trip he’d planned.

Gloria was puzzled as she saw the looks of horror exchanged by her friends.
“What happened?” Her eyes widened with concern, and then realized she had been drawn into the gossip like everyone else.


“Oh, my word.” Gloria covered her mouth and wanted to gag as if she smelled poor George. “That poor man. I cannot imagine…” 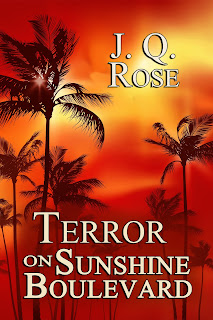 Click here to find this e-book at these popular digital booksellers.


Please join me at my next January stops.
Thursday, Jan 25--Diane Burton--Click here to join Diane, author of romance and adventure, and me. Leave a comment to win a PDF copy of one of my mysteries.

Saturday, Jan. 27--Ellen the Cynical Sailor spotlights Terror on Sunshine Boulevard. Click here to visit her amazing blog as she lives her life in a boat!!

* * *
Now please continue your reading journey through cyberspace by visiting these participating bloggers. Have fun!

Nice touches of humor. I've read the book and it gave me chills.

I'm with Gloria on wanting to gag. Good except. Tweeted.

Hi Janet, Thank you for reading the book. Glad you got some giggles and chills.

Hi Kris--yes, there are some scary scenes. I had to write the book during the daytime. NOT before bed!

Thank you, Daryl, for tweeting. Glad you enjoyed the excerpt even if it did result in gagging! LOL

Thank you, Mary!! Love that reaction.

Thanks, Kayelle. Haven't heard gross in a long time. LOL..