Hello and welcome to the Focused on Story Blog!

One of the basics when learning to be a writer is to listen to a lecture on the Five W's.  The 5 W's in a story are:
WHO
WHAT
WHERE
WHEN
WHY
These questions are the essence of a story. Since we are focused on story at this blog, we need to realize just how important working out the 5 W's can be for creating a great story for your readers.

You'll find this series with my guests informative and entertaining and not a stuffy lecture in a dusty, old classroom with a professor palavering on and on and on.

Today I'm thrilled to introduce you to my guest author, Mark Love. Isn't that a great name for a romance author? Mark is generously offering an eBook format of his book to a lucky commenter. To enter the drawing, add a comment below by 9 p.m. ET, Sunday, July 14. Good luck. Now let's explore the 5 W's in Mark's romantic suspense, Fleeing Beauty.


Here's my shot at the Five W's
THE FIVE W's: Fleeing Beauty (A Jamie Richmond Mystery) by Mark Love

Who:  Jamie Richmond is the star of the story. Just ask her, she’s not shy!  After working for ten years as an investigative reporter for one of the Detroit area’s daily newspapers, Jamie decided to pursue her passion and write mystery novels. A stubborn redhead who is fiercely loyal to her small circle of friends, Jamie is a magnet for trouble.  Using her skills and wits, she’s often able to unravel the mystery that draws her in.  Keeping her balanced and more than a little distracted is her blooming romantic relationship with Malone, a sergeant with the Michigan State Police.

What:  This is the third book in the series. Jamie’s father was a very successful artist who died suddenly when she was only seven-years-old.  Now, twenty-five years later, his studio is discovered, along with a hidden storeroom packed with crates of his work.  Jamie and her friends undertake the project of unpacking them to make a catalogue that can be appraised. Before they can finish, part of the collection is stolen.  Now Jamie is determined to find out who is behind the theft and recover the missing art.

In addition to the project and the mystery, there are several subplots. Romance is building with Jamie and Malone. Her mother, Vera and her ex-husband, Bert, are rekindling a few passionate connections. And there’s Ian, a teenage boy who is Malone’s unofficial kid brother, discovers Brittany, a neighborhood cutie.  Along with the artwork, Jamie also discovers several journals that her father wrote, that give her new insights into his life.

When:  It’s a contemporary story, and it takes place during the summer!

Where: Metro Detroit, or as some would say, Motown.  Jamie and her friends live in the suburbs, but a lot of the action takes place right in Detroit, down near Wayne State University, an area that isn’t far from the dark and dangerous side of the city.

Why:  Jamie likes to keep busy. Between writing novels, spending time with her friends and unraveling mysteries, it’s all part of her life. And she wouldn’t have it any other way.

In this scene, Jamie and Malone are with her best friend Linda, and Ian, the teenage boy, who is helping unpack the crates in the storeroom.
This sculpture was titled “Fleeing Beauty”.
It was a woman caught in the act of running. Tendrils of slender marble in various lengths and thicknesses extended from her head, as if they were locks of hair billowing out behind her. Part of her face was obscured, turned against her shoulder as if attempting to hide her features from whoever was chasing her. The woman’s body was voluptuous, full of dangerous curves. There was something haunting about this piece. The guys became quiet, which was unusual. Linda slowly moved around it, taking pictures.
“Holy shit,” Ian muttered.
“Watch your language,” Malone said, cuffing him lightly on the back on the head.
“How did he do that?” Ian said, taking a step away. “She looks real.”
“She looks alive,” Malone said.
“Check the file,” I suggested.
None of us could take our eyes off the sculpture.
We spread the file out on the worktable. There were pictures of a woman standing in front of a drop cloth. She was blonde, with an impish smile on her face. She could have been in her early to middle twenties. It was impossible to tell how tall she was. Her figure was eye-catching, with a tiny waist and rounded hips. Most of the pictures showed her in a one-piece bathing suit. There was one where she wore a sheer negligee. There were shots of her standing on a pedestal, others with her arms outstretched, and still others where she was looking over her shoulder. In a couple of photos, he must have used a fan to blow her hair back.
“She’s a doll,” Ian said.
“Jamie, I think this is the most beautiful thing I’ve ever seen,” Linda said softly.
“You’ll get no argument from me.”

Click a link below to download Fleeing Beauty at the following digital booksellers:
Barnes and Noble
Amazon
Apple books
Kobo

Mark Love lived for many years in the metropolitan Detroit area, where crime and corruption are always prevalent. A former freelance reporter, Love honed his writing skills covering features and hard news. He is the author of the Jamie Richmond romance mysteries, Devious, Vanishing Act and Fleeing Beauty, and the short story Stealing Haven, which is in the collection Once Upon a Summer.  His mystery series, starring Jefferson Chene includes WHY 319? and the new release Your Turn to Die.  Both Chene novels are also available on Audible. Love resides in West Michigan with his wife, Kim. He enjoys a wide variety of music, books, travel, cooking and the great outdoors.


You can find him on Facebook, Amazon and his blog at the links below.
Amazon
Motown Mysteries Blog
Mark's Facebook Page

Thanks for being my guest, Mark! 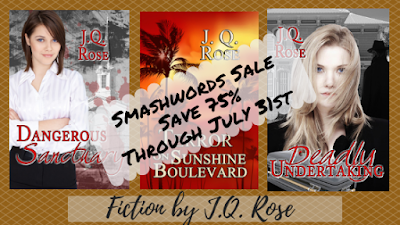 Don't forget to leave a comment to enter the drawing for
Mark Love's ebook, Fleeing Beauty!

Email ThisBlogThis!Share to TwitterShare to FacebookShare to Pinterest
Labels: books on sale at smashwords, focused on story blog, giveaway, Mark Love's Romantic Suspense--Fleeing Beauty, the 5 W's, the 5 W's of story

Glad you enjoyed it rado.

Mark, you're from Michigan and your setting is Michigan. Are you a believer in "writing what you know"?

Great way to summarize the book, Mark. I enjoyed this.

Thanks for stopping in, Jacqui.

I think by your last name that you were predestined to be a romance author. Great to meet you and learn about your writing.

Thanks for stopping in, Lee.

To an extent, I do write what I know. It's my habit to include settings that I'm familiar with, so it's easier for me to describe them.

Thanks, Lee. Sometimes the name can be a blessing or a curse. All depends on the situation.

Congratulations to Jacqui Murray who won the drawing for Mark's book. Enjoy!!