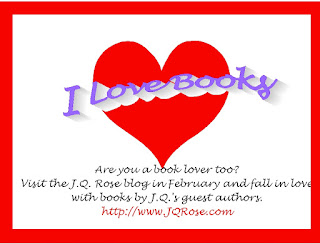 I am thrilled to have the talented children's author, C.K. Volnek, today as my guest on the J.Q. Rose blog. I enjoyed reading her book, A Horse Called Trouble, so much, I contacted her so we could get the word out on this book you'll love. It's my pleasure to be a guest on her blog today, what we refer to as blog swapping. Please take a minute after visiting here to click on over to C. K.'s blog, the Mind's Eye. 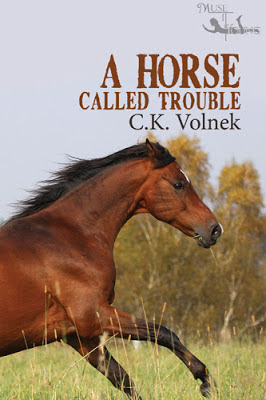 Hello. Oh, I thought we were meeting C.K. Volnek today to discuss her book, A Horse Called Trouble.

Sorry. C.K. asked me to take her place today. My name is Tara and this is the story of how Trouble and I met.

C.K. says I need to get out and meet our readers. I do like meeting you all. I never used to be comfortable meeting new people. I was always afraid of getting put down and pushed around again. But now since I’ve met Trouble and moved to Freedom farms, I have found I’m more confident and trusting.

Oh, how wonderful. Can you tell us a little bit about A Horse Called Trouble?

Sure. I was so happy when C.K. decided to write A Horse Called Trouble. It’s a horse story…of course. Lol. I’ve always loved horses, though until I was sent to this horse therapy program I’d never been around one in real life. Now, after everything Trouble and I have been through, I don’t know how I could live without him. He’s taught me so much.

How old are you, Tara?

I’m 13. I’ll be starting high school in the fall. I used to be afraid to go to high school. I just knew I would be miserable. I was always miserable. I never had any self-confidence and got pushed around a lot. Now, after meeting Trouble, I think I can handle it. I’ve made some friends and feel confident I can do it.

Good for you. Where are you from, Tara?

I used to wish I lived somewhere beautiful and green, like some place out of a travel magazine. But I’ve always lived in this dirty city. With it being in the mid-west, one would think there would be more green. But not so in the part I grew up in. It was all concrete and garbage. If something did try to grow, it was choked out by car exhausts and people tramping it.

Once, I found a bunch of ‘Little House on the Prairie’ videos in the dumpster out behind our apartment and I watched them over and over at Grandma Kay’s. (She wasn’t my real Grandmother, but I loved her as if she was. She took care of me when Mom was gone or drunk.) Anyway, I used to dream about running in the tall grass like Laura Ingalls does in the show. I never thought I would ever see that much grass. But going out to Freedom Farm was like a dream come true. There is so much grass and tons of trees. It’s the most beautiful place in the world.

At first I didn’t want to be at the farm. I was sent there because I’d been set up. I didn’t take Alissa’s purse…and she knew it. But it was just like her to get me kicked out of our school for it. I learned a long time ago to just keep my mouth shut and try to stay as low as possible to keep off everyone’s radar. Everyone expects me to be trouble. Partly because Mom was a drunk and dumped me, leaving me to fend for myself in foster care. I quit trying to prove to everyone I wasn’t bad. I couldn’t win. Then I met Trouble. Kind of funny, him being named Trouble. But we had a lot in common. And it’s because of him that I can hold my head high now. I never thought I’d ever feel confident or find happiness.

Sigh. It is. It’s beautiful. I’d never smelled lilacs before I went there. Oh my gosh, I loved it! My first day, all the kids were gagging because of the barn smells. It was pretty bad. A guy was cleaning out some really raunchy stalls. But once I got past that, the smells grew on me. I even found myself liking the smell of horse sweat. Ha!

The farm is just outside the city, though it feels like it’s light-years away. It’s fresh and green, with tons of open spaces. Wide open pastures and white rail fences. Horses of all colors and sizes. Peaceful. And quiet. You can even see a million stars from there.

You talked about a Horse Therapy Program. What is that?

It’s a really neat program. In this particular program, they bring troubled kids and horses together. The horses are our teachers. I thought the instructor was so stupid the first day when she said that. How was I going to learn anything from a horse? But they do teach us—a lot. Horses could walk all over us if they wanted to, but instead they choose to work with us…if we work with them. They teach us about teamwork, respect and trust. I’ll never forget the first day Clancy tried riding. Clancy is one of the other kids in our program. He was not working with Homer and Homer let him know it. I couldn’t help but laugh. Yeah, that didn’t go over so well with Clancy. I thought he was going to kill me.

What did Clancy do?

You have to understand, Clancy ruled Marvel’s. Or so he thought. I accidently kicked him where no guy likes to get kicked the first day I got to Marvel’s. I didn’t mean to. He dumped me out of ‘his’ chair and my leg just kicked him there. Anyway, ever since, he’s been after me. I tried to stay out of his way and hoped he’d forget. Except Alissa wouldn’t let that happen.

Alissa is a girl from my other school. She hates me. And I don’t know why. And she is so mean to Trouble, too. That was one of the things we had in common. I had to stop her from hurting Trouble.

Tell us about Trouble.

Trouble is a great horse. And he’s so beautiful. He’s what they call a bay—red with a black mane and tail and a white blaze down his face. At first I was scared of him. He was wild and crazy, ready to kill anyone in his path. But I can see why, knowing Alissa. If I hadn’t met him, there’s no telling what would have happened to him…or me for that fact. He saved me as much as I saved him.

Well, I need to go. Feeding time will be here soon and Trouble likes his oats. Thanks for letting me stop by today. C.K. wanted me to remind our readers, we would love to hear from them. They can find us… 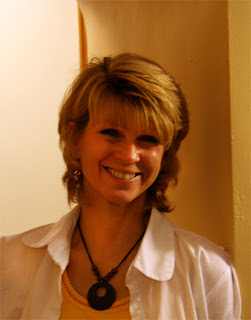 They can also find her on Facebook (C.K. Volnek) or Twitter (CKVolnek), Good Reads, and Jacket Flap.
A Horse Called Trouble can be found at the
MuseItUp Bookstore and Amazon
as well as other great on-line bookstores.

So, on behalf of C.K. Volnek and me, thanks again. We’d love for you to leave us a comment.
Tara Cummings

How about an excerpt to tantalize the readers?

Welcome C.K. and Tara. I really enjoyed the excerpt you chose to share and Tara's interview. Of course I'm a fan of the entire book. I think teens will identify with Tara's situation. Thanks for being my first guest author on the I Love Books Blog event!


Great interview. I love the idea of speaking with the main character. :)

Sounds like a lovely read. I wish you success with your sales. I think the concept will go over great with the Tweens.

I have read this book folks and anybody would enjoy it! It has something for everybody!

Tammy, I agree. Very clever to talk directly to Tara.

Penny, you're so right. This book is a winner!

Lorrie, you'll like it for sure. Just take our recommendation!!

Sounds so sad, heart wrenching even. Congrats, CK. Sounds like a great book. Tara is a wonderful character. I love her voice.

Off to visit you over at CK's blog, Janet.

What a great interview! Very moving and I look forward to reading the book! Tara, your story sounds very compelling, please congratulate Charlie for me on her success.

JQ, you have done it again, my friend. I wish you much success with your I Love Books Blog!

Very enjoyable character interview. I was a city kid who always wanted a horse. Never got a real one, but I love horse stories, and this one sounds like a winner. Best to you both, C.K. and Tara!

Greetings all. Sorry to be slow in chiming in. I am so honored to have J.Q. on my site today. And I'm honored to have this talented writer as my friend! Many kudos to her and her stories. Write on, Sister!

Thanks, Scott and Joylene. I never had a horse either, but luckily my girlfriend lived on a farm so we rode her big horse and a little pony. We would giggle so hard while we rode, we fell off the pony. Good times.

Thanks, Charlie. You are hosting me on your blog with such a magnificent title, J.Q. Rose, Author Extaordinaire.. Makes me blush.

Great interview, Charlie. I like that it is in Tara voice. Love the book.